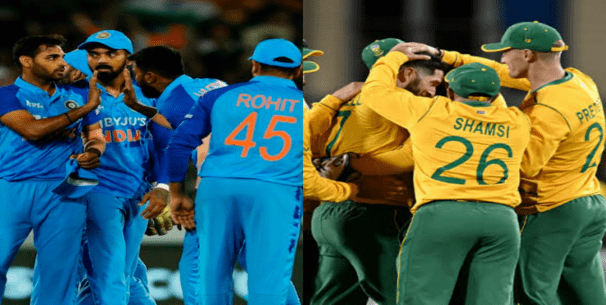 After a series victory against Australia in Hyderabad, the Rohit Sharma-led Indian side is set to face South Africa in a three-match T20 International series. The series will kick off on Wednesday (September 28). This is India’s last schedule before the T20 World Cup 2022 in Australia starts next month (October 16). The side will also play three One Day Internationals (ODIs) as soon as the T20I series terminates.

Facing South African men will certainly test the Indian camp as both sides have had a victorious year, in at least the 20-over format.

The Indian men haven’t lost a single bilateral T20I series since the result of the last T20 World Cup in UAE. While Proteas too, have done well in the shortest format of international cricket. Besides, this is South Africa’s second tour to India for a T20I series.

It was June 2022, when South Africa visited India for a five-match T20I series and under Rishabh Pant’s leadership then, India managed a tie (2-2) as the rain invaded the fifth game in Bangalore, which, eventually, had to be abandoned. More importantly, South Africa, somehow, have not lost a bilateral T20I series in India since 2015.

Furthermore, Proteas batting superstar Rassie van der Dussen will not be available for the series after being ruled out due to a fracture in his left index finger; the injury caught him during the second Test match against England. However, Dussen is not a part of South Africa’s squad for the upcoming T20 World Cup.

IND vs SA: Squads of India and South Africa for t20i series