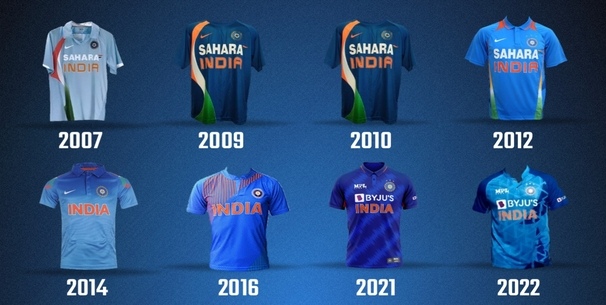 The obsession with the jerseys among Indian cricket fans is second to none. And to respect that and also to maintain the hype around it, BCCI has made a trend of introducing a new jersey at every ICC event. For this year’s T20 World Cup 2022, the team’s official jersey is sponsored by MPL. To increase engagement, MPL even organized an online campaign wherein fans could enter their designs for the jersey. The official jersey of Team India for the ICC Mens T20 World Cup 2022 was unveiled by MPL a few weeks back, has been applauded by the fans, and is a massive hit.

Team India Jersey: Let’s take a look at India’s official jersey’s over the years in the T20 World Cup:

2007 was the year when ICC inaugurated the T20 World Cup. Team India wore a traditional light blue jersey, which was the identity of Team India in those days. It also had a tri-color pattern on the right side and “INDIA” written right in the middle. The jersey proved to be lucky as India won its only T20 title that year. Team India opted for a darker shade of blue for this edition of the T20 World Cup. The overall pattern remained the same. Only the color was changed to a darker shade. It also had bright orange color collars. In the third edition, Team India decided to keep the pattern intact and wore a similar jersey compared to 2009. The dark blue shaded jersey had a unique dash of bright orange color collars that stood out. 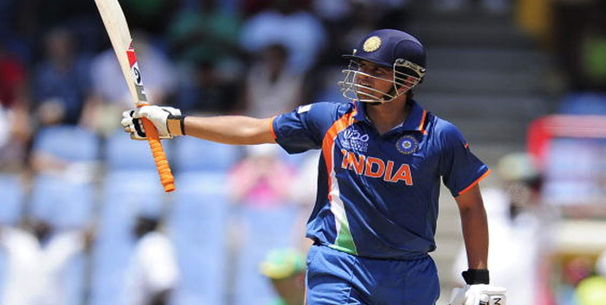 Team India was supposed to don a new jersey for the T20 World Cup 2012. However, the plan was shelved and the men in blue wore the same jersey that they donned in the ODI World Cup 2011. The jersey was light blue in color accompanied by an orange stripe on the shoulders. It also had light orange strides on both sides. This year, Team India donned a different jersey from the usual. The color remained blue. However, there was a unique tri-color pattern on the shoulders. Also, the jersey consisted of a robotic pattern at the end. The light blue and bright orange combination looked impressive. For the year 2016, the jersey was reduced to a light shade of blue. Interestingly, this time around there was a unique, orange-striped pattern starting from the right shoulder all the way to the middle. It gave a unique, catchy look to the traditional jersey.

The T20 World Cup returned after a gap of 5 years owing to unforeseen circumstances. This time around, Team India chose to go with the darkest shade of blue. The jersey patterned by MPL has special details to it. The jersey was named the “Billion Cheers Jersey.” It had a combination of big stripes made up of dark and light blue colors. While, the stripes had wavy edges, which resembled the cheers of the fans for the team. For this year, Team India has switched back to the traditional light blue color. Furthermore, the shoulders are dark with a metallic 3D pattern in the center. ICC Mens T20 World Cup has begun on 16th October. Team India will start its campaign on 23rd October by facing its arch-rivals Pakistan in a high-pressure game. We wish the team all the luck and sending across prayers for the win.