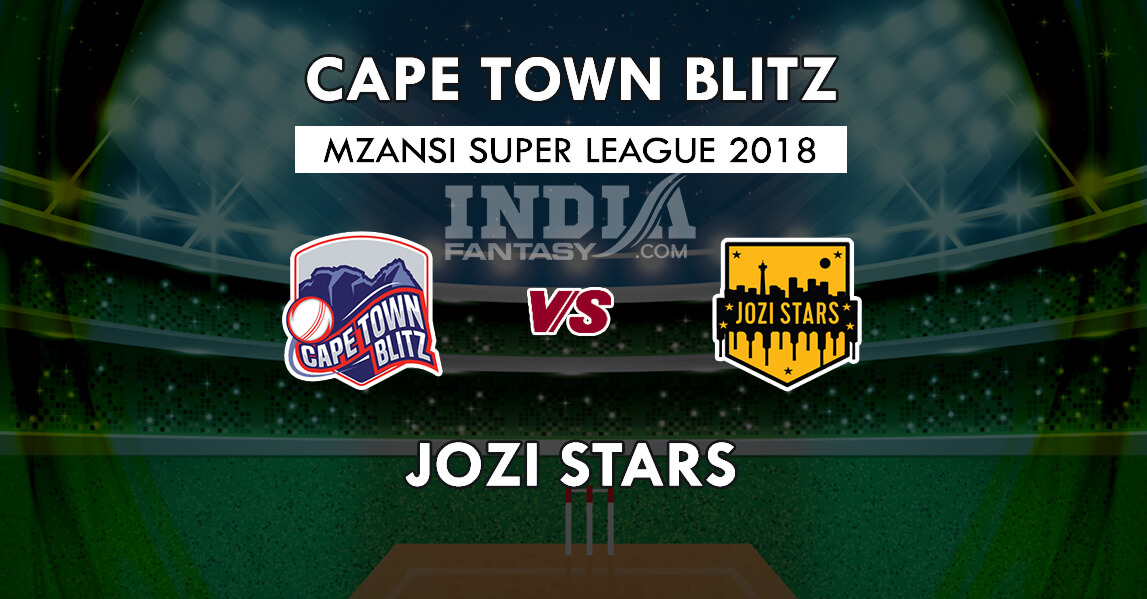 As the caravan of the 2018 Mzansi Super League rolls on, Cape Town Blitz will play host to Jozi Stars at the picturesque Newlands Cricket Ground on Tuesday

Both sides are coming off commanding wins in their last fixture. While Cape Town Blitz en-route to their fifth win of the tournament swatted aside Tshwane Spartans with a 60-run win, Jozi Stars put on yet another complete performance to pull off an 81-run win against the Nelson Mandela Bay Giants.

One Common denominator that spearheaded both sides to a commanding win was one of the openers stroking a pearless ton to set-up the match for their sides. While it was Quinton de Kock [108 off 55 balls], who led the way for Cape Town, it was Reeza Hendricks [108] who smashed his second successive ton to help his side post 3-173 in 20 overs.

But, unlike Hendricks, who got valuable support from the middle-order, Quinton de Kock was the lone performer for his side.

De Kock [108] scored a staggering 62.7% runs of his side’s total [9-172] as no other batter barring fellow opener Jaaneman Malan [34] could register double-digit scores.

Against a formidable bowling line-up like the Stars’, Cape Town Blitz will hope more batsmen take responsibility if they are to continue with their impeccable run in the tournament.

Quinton de Kock [108] and Reeza Hendricks [108] were the spearheads for their teams’ in the last game. They will open the batting with de Kock also taking up the gloves.

Cape Town Blitz middle-order suffered a meltdown in the last game. Hence, picking the likes of Rassie van der Dussen and Petrus van Biljeon will be safe bets. You can opt for Farhaan Behardein from Cape Town Blitz.

Dwane Pretorius claimed three wickets in the last game. He, along with Simon Harmer and Andile Phehlukwayo will take up the all-rounders spot.

Both sides boast of good bowling attacks. You can opt for the likes of Rabada, Beuran Hendricks, Dale Steyn and Nandre Burger [3-19] in your Dream11 line-up.