After the first two matches settling for a draw, the third match of Duleep Trophy 2019 will see India Green and India Red locking horns at the KSCA Cricket Ground in Alur.

The first match was drawn due to excessive rains but the second match saw a full game which eventually ended in a draw when India Red batted twice and closed their second innings for 297/6.

The top two teams will battle each other in the finals which will be played at the M Chinnaswamy Stadium in Bengaluru on September 04th. The current standings of the points table suggest India Red are at the top with 3 points followed by India Blue and India Green with 2 and 1 point respectively.

Karun Nair was outrageous in the last encounter scoring 166* and 99 in the two innings he played. Once again he will be the most crucial aspect in the batting unit of this line-up.

Himachal’s young talent Ankit Kalsi scored a brilliant 106 in the last game and got 170 runs from the two innings he played against India Blue.

Avesh Khan, Jaydev Unadkat and Akshay Wakhare ended with 4, 3 and 3 wickets respectively to their name in the last game.

India Green batting unit has not got any chance so far in the only game they played against India Blue as rain spoiled the fixture.

Skipper Faiz Fazal will be the linchpin of this batting line-up and will get the much-needed support from the likes of Dhruv Shorey, Akshath Reddy, Siddesh Lad etc.

Ishan Porel and Tanveer Ul-Haq took 3 and 2 wickets respectively in the rain-marred game against India Blue.

Ankit Rajpoot and Rahul Chahar are the other reliable bets in the bowling department. 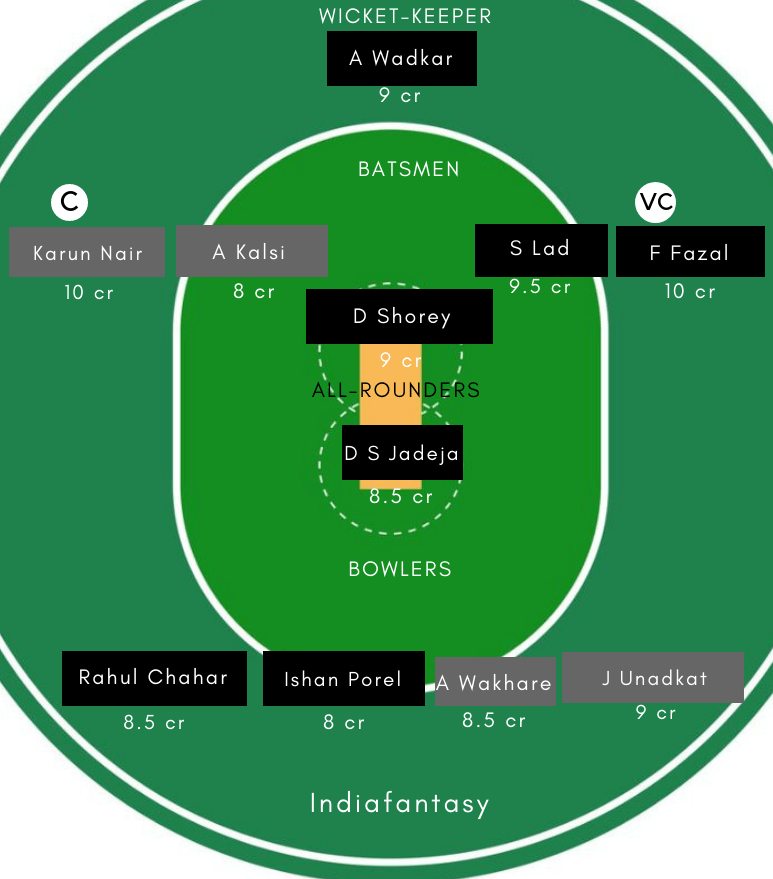 Disclaimer: Management can take late decisions depending on the match situation. The fantasy teams which we have provided here of IN-G vs IN-R Dream11 is best of our interest and depending on the credit scores of the players.

An ardent sports enthusiast who likes to write in such a manner so that the readers could relate themselves and feel the passion of the game.
Previous ArticleSS vs LT Dream11 Grand League Prediction | Womens Super League
Next ArticleIN-A vs SA-A Dream11 Match Prediction | IN-A vs SA-A ODI | Playing11, Fantasy Team News