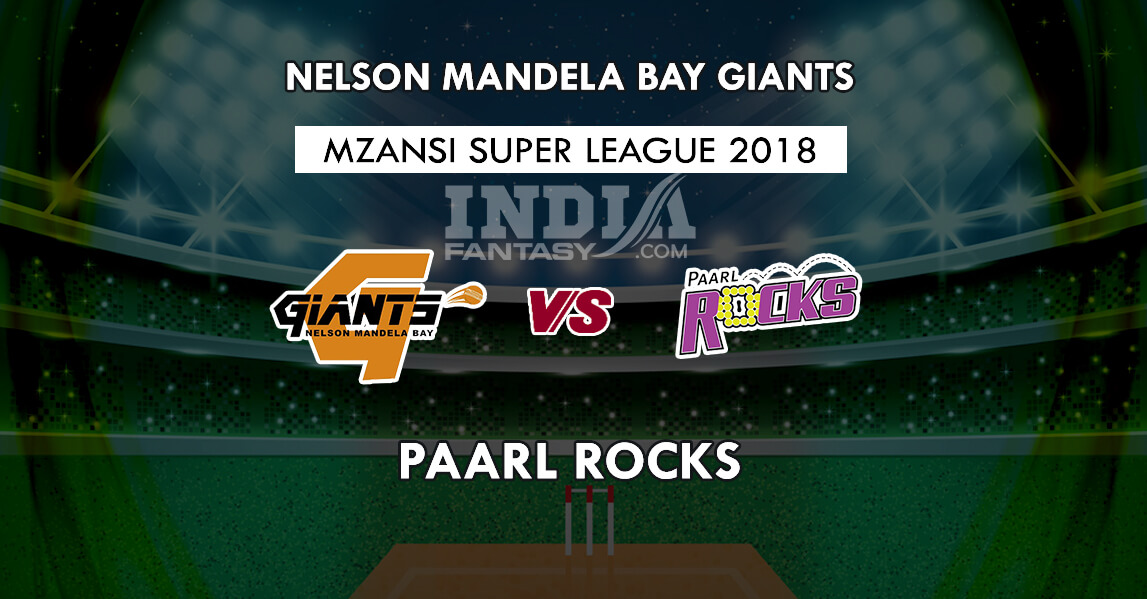 Nelson Mandela Bay Giants and Paarl Rocks will face each other in their final group encounter on Wednesday in hope of securing a place in the top three. Both the teams will lock horns at Boland Park in Paarl on Wednesday evening.

With 17 points in nine games, Paarl Rocks are placed fourth in the league table and have a must win encounter ahead them. Not only this,  Rocks will have to win the  encounter with good margin to avail the bonus points which can fancy their chances of making into the third position. After two consecutive defeats against Tshwane Spartans and Cape Town Blitz, Rocks would be charged up with their 6 wickets win over Jozi Stars in the last encounter and would be looking to repeat the same.

Nelson Mandela Bay Giants are placed third in the points table with 21 points. They will directly advance to the next round if they secure a win here, no matter small or big. However if they lose, they might get knocked out of the tournament.

When last time both the sides met at Port Elizabeth,  Nelson Mandela Bay Giants turned out to be the winner by 48 runs after bowling out Rocks for mere 120 while defending 168/9 on the boards.

Also, Tshwane Spartans on the fifth place are an alarming warning for both the sides- Paarl Rocks and Bay Giants. Spartans are still alive in the competition and require two wins in two encounters. So, there’s no room for any mistake for either sides.

This NMG VS PR Dream11 prediction is high-risk but you may reap rewards if some assumptions come off. We advise you not to use these teams in small league contests.

The wicket has produced 200+ scores multiple time. It is a good batting surface with ample of help for batters. So, picking up power hitters as captains and vice captains will be a right decision. Du Plessis is the top scorer from his side while Jason Roy has returned from an impressive instinct in T10 league.

From Paarl  Rocks we are picking Grant Thompson and K Mungroo. Thompson played a crucial knock of 71 unbeaten while K Mungroo was the highest wicket taker for the side in the last game.

THIS NMG vs PR DREAM11 PREDICTION IS HIGH-RISK BUT YOU MAY REAP REWARDS IF SOME ASSUMPTIONS COME OFF. WE ADVISE YOU NOT TO USE THESE TEAMS IN SMALL LEAGUE CONTESTS.