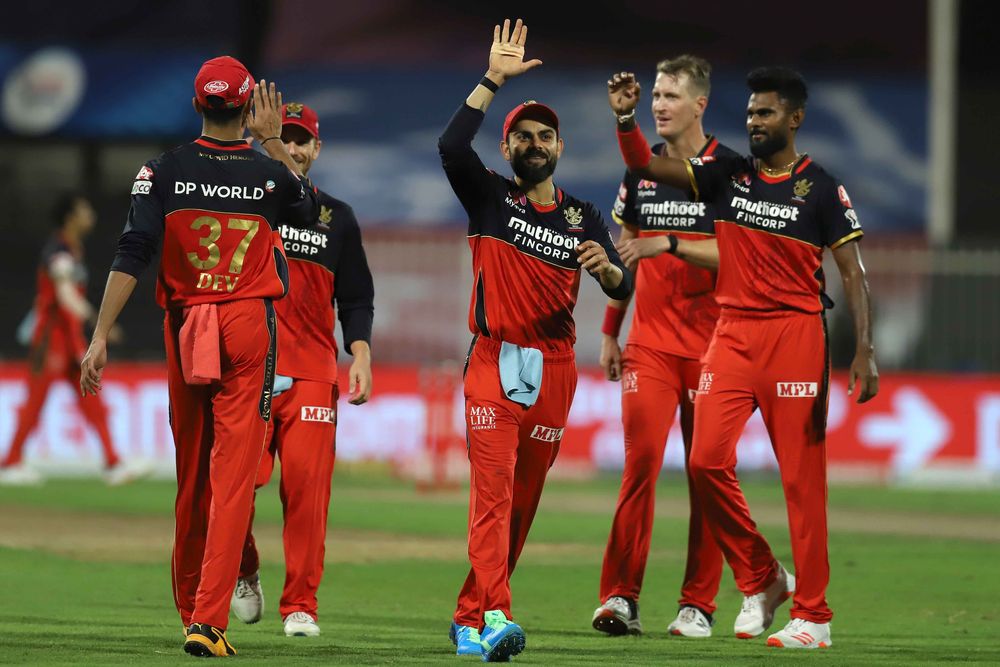 KOL vs BLR today match prediction: BLR demolished KOL in their previous meeting in Sharjah in this year’s IPL where BLR won the game by a whopping 82 runs which boosted their NRR by a massive margin. The greatest of all time in AB De Villiers scored a scintillating 73 off 33 balls that included 6 maximums and 5 boundaries. On a wicket where everyone found it difficult to bat, AB De Villiers showed his class and it is safe to say that BLR batted KOL out of the game.
KOL, who were struggling at the point have just managed to find the winning combination in their last game where they unleashed Lockie Ferguson who took 5 wickets (including 2 wickets in the super over) and made KOL management to realize that they have made a huge blunder by not playing Lockie Ferguson right from the word go. He was breathing fire and was showcasing magnificent T20 bowling with pace and change of pace which left the SRH batsmen clueless.

BLR will be a happy side at the point in time but they cant take things for granted as losing the momentum at the wrong time might go put them in precarious situation and they might find themselves in a do or die situation all of a sudden. Let’s now take a look at KOL vs BLR dream11 prediction.

In KOL vs BLR today IPL match prediction, let us discuss the strengths and weaknesses of both the sides
Strengths
Kolkata Knight Riders (KOL)
They have finally decided to play with 2 quality overseas pacers which is a norm in this IPL. The form of Varun Chakravarthy is a massive advantage to them. They also brought back Kuldeep Yadav into the side who looked decent in the previous game.
Royal Challengers Bangalore (BLR)
The form and confidence of Mr.360 is sky high as usual and he looks like unbeatable in this tournament so far. Their death bowling has improved leaps and bounds since Chris Morris came into the side. They are looking like a well rounded unit at the moment.

Weaknesses
Kolkata Knight Riders (KOL)
The form and intent of Shubman Gill is a bit if a worry for them. Rahul Tripathi has been inconsistent ever since his match winning 81 against CSK. The form of Nitish Rana is pathetic to say the least. In short, their top 3 has been a big let down for them.
Royal Challengers Bangalore (BLR)
Their overseas recruit Aaron Finch’s significance in this tournament has been negligible. They need to look into Isuru Udana who was thrashed to all parts by RR batsmen. They might want to bring in Moeen Ali in place of Isuru Udana to boost their middle order

KXIP vs BLR dream11 team for today’s match
In KOL vs BLR dream11 prediction, let us bring out the important players in the context fantasy leagues
AB De Villiers: This is a no brainer. There shouldn’t be any fantasy team without AB De Villiers. He is is freaking form and he will be looking to go big for one more time as well.
Lockie Ferguson: He picked 5 wickets in his comeback and will be the go to man for Eoin Morgan against an explosive batting order like BLR
Chris Morris: He has picked 9 wickets in 4 games at an average of 9.33. He is their premium death bowlers and he is bound to take wickets.
Yuzvendra Chahal: He is competing for the purple cap spot and he has picked 13 wickets in the season so far. He is the primary wicket-taker for Virat Kohli. He is a must in fantasy teams
Other picks: Dinesh Karthik, Shubman Gill, Navdeep Saini and Virat Kohli all can be handy picks

Today match IPL pitch report: The wicket will have good covering of grass and should help fast bowlers.

Who won yesterday match: RR won the game by 7 wickets against CSK

Taking the life out of me is better than taking cricket from me. Welcome to my world which gives nothing but happening stories in the cricketing world
Previous ArticleKXIP vs DC Today Match Prediction Kings XI Punjab vs Delhi Capitals Who will win Today 20 October
Next ArticleRR vs SRH Today Match Prediction Rajasthan Royals vs Sunrisers Hyderabad Who will win Today 22 October