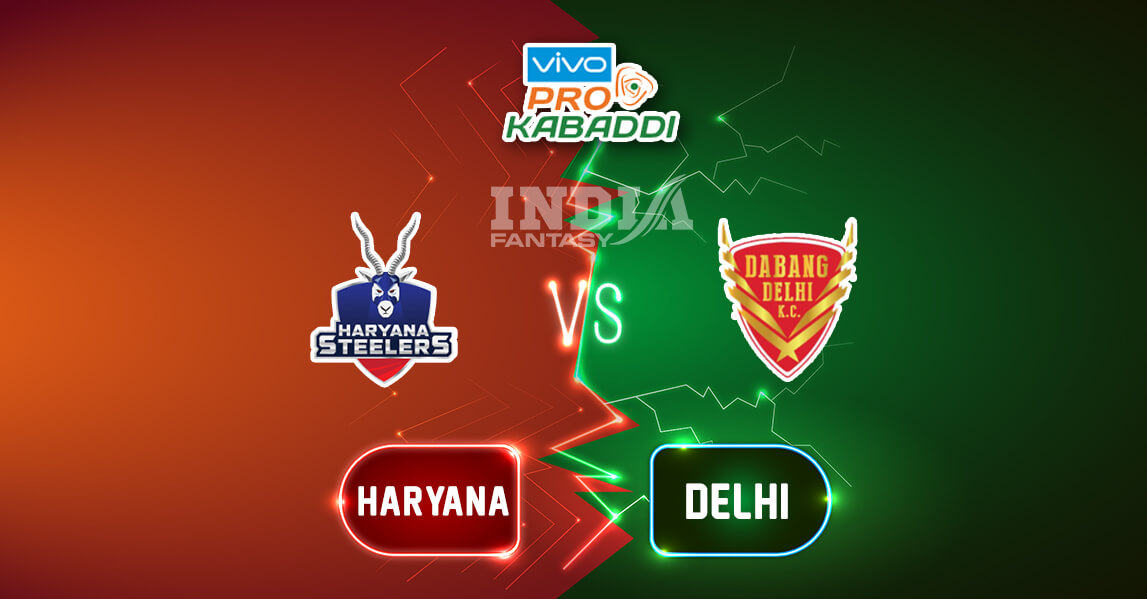 Round 3 between the neighbours is scheduled to take place at the Shree Shiv Chhatrapati Sports Complex in Pune. The Dabang Delhi K.C will be up against Haryana Steelers for the third time in this competition. The two encounters prior to this game between the two teams went apiece which means this game would be a cracker of an encounter.

Dabang Delhi and Haryana Steelers collided for the first time in Sonepat in the second leg of the tournament. Haryana didn’t had a great outing at their home but they managed to tame Danbang Delhi by 34-31 thanks to a ferocious show from Vikas Khandola who got 9 raid points to his name. He got an able support in the form of his captain Monu Goyat who himself got to 7 raid points which was his personal best for the season that time. In defence, the new man in Parveen blazed his way with 6 tackle points to his name.

For Delhi, it wasn’t a good day in the office but there were some individual performances which kept them in contention throughout the game. Raider Chandran Ranjith was the top scorer with 8 points and in defence, Ravinder Pahal got a high 5.

The second meeting between the two sides took place in Greater Noida which wasn’t far away from the base 0f the two teams. This time around, Delhi took the revenge in style as they completed a commendable victory over Haryana by 39-33. It was a night to remember for Naveen Kumar who got 9 raid points which led the foundation for a win.

Defenders: The defensive brute force of Joginder Narwal and Ravinder Pahal have performed immensely well in tandem and will look to continue with the same, the duo has accumulated 65+ tackle points between them.

Meanwhile, for Haryana, the impetus would be on Sunil and Parveen, both have been doing well on the past and they will look to continue with their persistent show.

Among others, Sudhanshu Tyagi and Vishal Mane are considerable options.

All-rounders: Meraj Sheykh is a good option here, he was the star against Gujarat with 6 points to his name and will be a fruitful choice here. You can also bet on Rajesh Narwal who has been a regular member from the last 3-4 games.

Raiders: The big games in this facet are Vikas Khandola and Naveen Kumar as both have been on the top of the ladder for their respective sides in the raid department.

Among others, going with Monu Goyat can be a good call who returned with a super 10 in his last game against Fortunegiants. Chandran Ranjith is also a choice here.