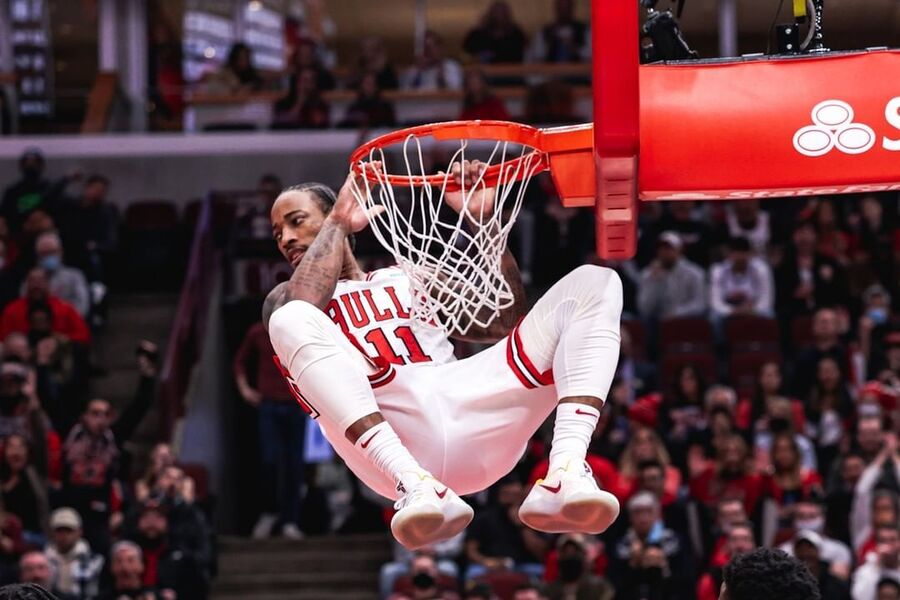 CHI vs SAS Dream11: NBA will head towards the All-Star Break window and it will provide much-needed rest for a few days before the intense push towards the postseason begins. With the Play-in tournament, you can see an intense race for the last few spots and with the league expanding the Playoffs structure, a lot of bottom feeders remain in the race to the tournament for the distance. Well, I am yet to develop an opinion about the Play-in tournament as of now because I think it also doesn’t reward the seventh and eighth ranked teams well. Anyway, with that in mind, let us jump into this game between the Chicago Bulls and the San Antonio Spurs.

The Bulls have been dealing with a huge number of injuries and they have 15 more wins than losses, currently on a three-game winning streak. DeMar DeRozan has pulled up his socks and has been a huge factor on the offensive end while Vucevic has been a force in the middle but yes, the reserves of the Bulls are still running thin.

The Spurs are struggling this season and yes, sure, they have won two in a row but they have been troubled throughout the season. They have 13 more losses than wins but somehow, remain in the aforementioned Play-in contention as the race for the last two to three spots becomes more and more intriguing with each day.

Bulls: DeRozan and Vucevic combine for an experienced duo
DeRozan is a terrific isolation scorer and his ability to score from mid-range has been just superb for many seasons. However, he has looked just on a different level this season, going hard at its game in and game out. I smell a hunger for the championship from the veteran two-guard who has been amping it up on a regular basis. With Vucevic in the middle, the team has an incredible Center who can pile up double-doubles and also keep the offensive and rebounding rhythm afloat this season. These two are two of the most talented and experienced players in the league and that is why the Bulls have seen a resurrection recently.

With Lonzo Ball and Alex Caruso, the Point Guard depth is hurt but rookie Ayu Dosunmu has escalated his playmaking and scoring considerably in the starting role. Meanwhile, Coby White has been a terrific isolation scorer who brings much-needed production. However, the bench has significantly been hit and the team has been running thin in terms of back-ups. Now, with Zach LaVine out, the team has taken even a further hit and he is surely an important part of the overall system. The Bulls’ defense has also been a bit suspect but in the long run, the Bulls have laid a strong foundation for a deep postseason run.

Spurs: Offensive dynamos
Spurs are one of the best offensive teams and the team leads the league in assists per game. DeJounte Murray is a major carrier. Murray has been the leading scorer and playmaker for the team while he also can get his hands on various steals. He is definitely a headliner for the team and with him around, the Spurs have been able to mount an effective attack on a consistent basis. Murray is the type of PG that slates in well in Greg Popovich’s offensive system and I can’t stress it enough. The Spurs traded Derrick White and that has caused some ruptures in terms of the team balance but Devin Vassell has been starting since he is gone.

Devin has been scoring at a higher rate and he can certainly develop at a high clip. Doug McDermott and Keldon Johnson are two wings that have been shooting brilliantly from the deep, and they form one of the sturdiest shooting wing combinations. Jakob Poeltl is an impressive rim protector and has also the ability to score close and also grab major rebounds, leading the team in blocks and rebounds. Lonnie Walker IV will need to be more efficient as the bench has been compromised as of now and if Josh Richardson is certainly a welcoming addition. Can the Spurs feature in the Play-in tournament?

DeJounte Murray(SAS)
Points: 31
Rebounds: 07
Assists: 12
Steals: 02
Murray has been a brilliant player at the one-guard position and his all-around skills have been accompanied by an increase in scoring, which makes him a candidate for the Most Improved Player. Murray has been in 20+ points, 6+ rebounds, 8+ assists, 1+ steal range recently
Expected Fantasy Points Range: 48-60 DeMar DeRozan(CHI)
Points: 38
Rebounds: 06
Assists: 05
Steals: 01
DeRozan has been having an MVP-level season and he is carrying the major offensive weight for the Bulls which has helped them remain competitive. DeMar has scored in the 35-38 points range while grabbing 5-6 rebounds and dishing 4-6 assists.
Expected Fantasy Points Range: 45-53

Jakob Poeltl(SAS)
Points: 07
Rebounds: 11
Assists: 02
Blocks: 04
Steals: 02
Poeltl is having a breakout season and he has become one of the best finishers around the rim while hoarding rebounds and blocks. Jakob has scored in the 7-12 points range while grabbing 10+ rebounds and blocking 1+ shots on a regular basis.
Expected Fantasy Points Range: 27-37

Nikola Vucevic(CHI)
Points: 31
Rebounds: 15
Assists: 00
Steals: 02
Blocks: 02
Nikola has been a terrific scorer for the Bulls and he can also go hard on the rebounds during most nights. Vucevic has scored 18 or more in four of the last five games while grabbing 12-16 rebounds per game on a regular basis.
Expected Fantasy Points Range: 40-50

Devin Vassell(SAS)
Points: 14
Rebounds: 04
Assists: 04
Blocks: 01
Steals: 01
Vassell has increased his production ever since being inserted into the starting lineup with Derrick White traded to the Celtics. The Guard has been in the 14-20 points, 3-5 rebounds, 3-4 assists, and 1-2 steals range.
Expected Fantasy Points Range: 25-35

Ayu Dosunmu(CHI)
Points: 12
Rebounds: 08
Assists: 09
Steals: 01
Ayu is having a terrific season as a rookie and he has picked up the slack created at the PG position. The rookie has been in the 11-15 points, 7-10 assists, and grabs around 4 rebounds a game regularly.
Expected Fantasy Points Range: 30-41

Eh, why would an NBA fan not want to catch DeRozan sizzling it from mid-range and DeJounte Murray taking it to the rack! But again, a bummer from the Indian-based platforms, TV outlets MTV and VH1 are not going to display this game for Indian viewers. Meanwhile, streaming platforms Voot and JIOTV will also not display this game. So instead of relying on these services, you can buy the annual subscription in the NBA League Pass, which gives access to all the live games, and if are unable to catch the live stream, you can also watch the full game replays. For getting the scores, stats, and news, visit the official website of the NBA.