For the second game in a row, Los Angeles Lakers are at home and will be hosting Minnesota Timberwolves at the Staples Center in an NBA match, on Thursday morning (IST).

Just when it felt that Lakers have hit the defragmentation button for the good after winning two games for the first time this season, came Toronto Raptors match.

The Showtime were fresh from dismantling a high-profile team in Portland Trail Blazers. Also, Raptors came without sore-footed Kawhi Leonard. So it was a chance to make a statement that Lakers are ready to make a sustained challenge for the playoff position.

But even without their superstar, Raptors proved to be too big a match for the team still in transition and a long way away from getting into a perfect sync with their star LeBron James.

The 107-121 defeat left them with a 4-6 record and at 11th in the table. Next up for them is a match against Minnesota Timberwolves who have already beaten the Staples Center side earlier this season.

The season is going from bad to worse for Minnesota Timberwolves. Not only they are losing matches and getting beaten by some unfancied teams at the moment, but they are almost guaranteed to lose their biggest star, Jimmy Butler.

There are reports in the media that the 29-year-old Small Forward will be leaving the franchise in the coming days and his destination is Houston to play with the Rockets. Well, there may not be too many players of such talent available right now, but sooner it happens the better it will be for Minnesota to clean up the mess that has engulfed the franchise.

The last game also ended in a 120-109 loss against the Los Angeles Clippers, which was Wolves’ 3rd in a row.

LeBron James – If Jimmy Butler doesn’t play this match then there is only one player who could be you starman in this match and he is a three-time NBA MVP LeBron James.
The former Cleveland Cavaliers man is going for 26.8 points per game this season.

Kyle Kuzma – You can call him the Kyle Lowry of Los Angeles Lakers as far as his contribution to the team and his role as the 2nd fiddle for Lakers is concerned. The 23-year-old Utah born player is averaging 19 points per game and he should be in your NBA fantasy team.

Jimmy Butler – he has missed some games this season. No not through injury but to reason which goes like ‘resting’ or ‘rotation’ to name a few. Butler himself has said that he is not sure whether he will play this match or not. But if he plays he is indispensable for your chances of making it big in the fantasy game.

Karl-Anthony Towns – Definitely a go-to-man if Butler is not around. Still just 22, but plays like a seasoned player. His season average is 18.8 but in the last five games, he is dropping points at 21.8. So clearly a player in form.

Minnesota Timberwolves:
Injured – Justin Patton will once again miss the match due to his foot injury.

Questionable – Meanwhile, Jeff Teague has been listed as questionable.
Also, Jimmy Butler’s inclusion is a bit doubtful given he himself has issued a statement that he is not sure to play this match. 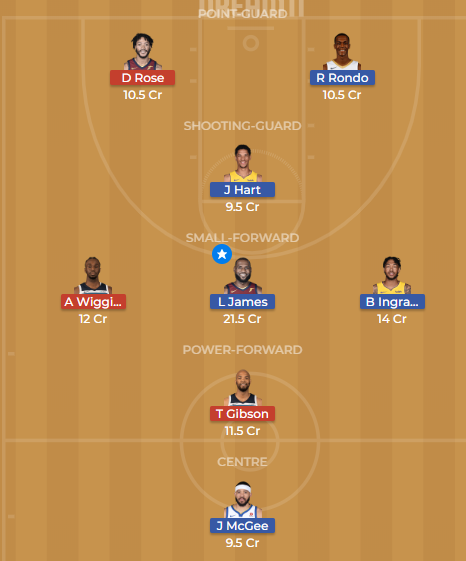 We are backing Los Angeles Lakers to win this match.

NOTE: THIS LAL vs MIN DREAM11 MATCH PREVIEW IS BASED ON OUR RESEARCH AND UNDERSTANDING FROM VARIOUS NEWS SOURCES. YOU CAN SELECT YOUR OWN PLAYING 11 ON THE BASIS OF TEAM NEWS.