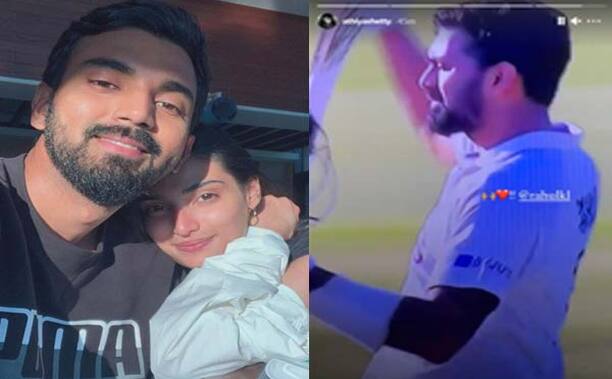 KL Rahul Girlfriend Athiya Shetty Instagram story: Team India once again dominated the entire day 1 of the 2nd Test against England at Lord’s. After losing the toss and being asked to bat first in a bit of overcast conditions, the India batters delivered a wonderful performance to finish at 276 for 3 at stumps on Thursday. Indian opener KL Rahul was the star performer of the day scoring a sensational hundred.

India’s opening duo of Rohit Sharma and KL Rahul were once again phenomenal in the second Test against England putting on a fabulous partnership of 126 runs. Rohit played a brilliant innings of 83 runs to provide a solid foundation at the top. However, it was Rahul who composed a stunning hundred at the Home of Cricket, Lord’s. Bollywood actress Athiya Shetty took to her Instagram Story while celebrating her rumoured boyfriend, KL Rahul’s century at the Lord’s.

Related: 5 Batsmen Who Can Score Most Runs in ENG vs IND Test Series After an amazing opening partnership of 126 runs, India lost two big wickets of Rohit and Cheteshwar Pujara in quick time. However, the pair of Rahul and skipper Virat Kohli then batted sensationally well to stitch a staggering 117-run partnership for the third wicket. But England did make a slight comeback in the Test match as Ollie Robinson removed the Indian captain just before stumps on Day 1. After a first-ball duck in Nottingham, Kohli managed to score 42 runs in the first innings of this second Test. KL Rahul ended the day with a scintillating unbeaten innings of 127 runs that included 12 fours and 1 six, batting alongside Ajinkya Rahane. India will now be eyeing to put up a mammoth first innings total close to 400-450 mark in order to put pressure on the hosts.

A cricket maniac who lives his life like a T20 match, time is short so make the most of it. Always thriving to learn more about cricket writing and obviously being an Indian, a big cricket expert.
Previous ArticleKL Rahul’s “Unbelievable” Boundary Save in IND vs ENG 1st T20I – WATCH