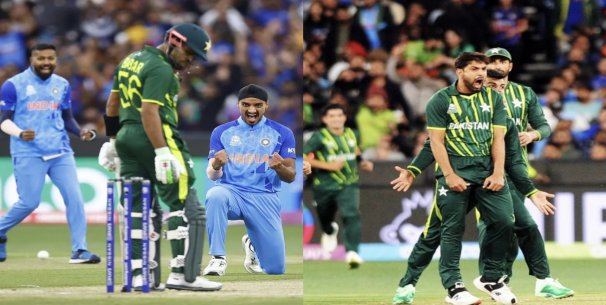 India and Pakistan clashed with each other in the opening counter of Group B of the T20 World Cup 2022 at Melbourne Cricket Ground. It was a high octane clash that saw around 1 lakh spectators in the ground. It was a game that saw bowlers of both the teams setting the stage on fire. But it was a classical  Virat Kohli show who yet again proved why is he best in the world and sealed the game for his side with 5 wickets in the bag.

Indian skipper Rohit Sharma won the toss and opted to bowl first. His decision to field first worked well in favour of him as Bhuvneshwar Kumar and Arshdeep Singh made full use of the new ball and made Pakistan batters look clueless.

While Bhuvneshwar Kumar contained the runs, it was Arshdeep who removed both the Pakistani openers to leave them tumbling at 15/2. After that Shan Masood and Iftikhar Ahmed (51) stitched a decent partnership.

But pacers yet again brought India back in the game as Pakistan was tumbling at 120/7. Masood (52*) played a handy knock to take his side to the total of 159 runs. All four Indian pacers were among the wickets whereas spinners struggled to get going.

Chasing the target, it was a not a good start for India as they lost both KL Rahul and Rohit Sharma for just 4 runs each. To worsen the case more, in form batter Suryakumar Yadav also perished for 15 runs. Akshar Patel was then promoted up the order but the move didn’t work as a mixup saw him back in hut to leave India tumbling at 31/4.

Virat Kohli and Hardik Pandya then steadied the Indian innings and stitched crucial 100-plus partnership for their side. The duo were cautious at the start and also punished the bad balls. However, few quite overs put them at the backfoot. But Kohli turned the momentum towards his side and brought up his fifty by smashing 17 runs off Shaheen Afridi in the 18th over and 15 runs off the Haris Rauf in 19th over. With 16 runs needed off the last over, India lost Hardik Pandya on the first ball for 33 runs. But Kohli held his nerves sealed the game for his side with his unbeaten 82 runs knock.

India vs Pakistan T20 World Cup 2022: Who won Man of the Match in the gems between India and Pakistan

Virat Kohli was awarded Player of the Match in the match between India and Pakistan. The right-hander was at his classical best as he smashed unbeaten 82 runs to seal the game for his side. After India lost quick wickets, Kohli held one end and soaked in all the pressure.

He took calculated risks and when the need arose, Kohli took bowlers to the cleaners and smashed them all over the park. He sealed the game for India from the jaws of defeat and smashed 6 fours and 4 sixes in his knock.