IND vs NZ Today Match Prediction for India vs New Zealand 2nd ODI– Who Will Win IND vs NZ match? 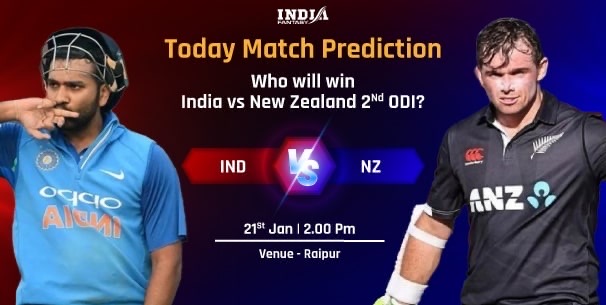 IND vs NZ 2nd ODI: It was an enthralling start to the ODI series between India and New Zealand as the first game went down the wire and saw both the teams facing a bit of scare. But it was the hosts, who held their nerves well in the end and bagged the match by 12 runs to take 1-0 lead in the series. The focus is now on the second game that will be played on 21st January

The pitch at the Shaheed Veer Narayan Singh International Cricket Stadium, Raipur offers help for both for batters and bowlers. Only two games have been played here and it has seen batters along with both spinners and pacers in play in patches. The captain winning the toss would want to bat first as it’ll be best time to bat.

Indian skipper Rohit Sharma is expected to the best batter in the second ODI against New Zealand. The right-hander has been timing the ball quite well but has failed to smash a big score. Although he didn’t get a big score but it is expected that he will achieve in the second game. His stats are exceptional as he has scored 9596 runs at an average of 48.71

New Zealand spinner Ishan Sodhi missed the first game due to injury but it is expected to be the best bowler in the second ODI between India and New Zealand. The leg-spinner has often troubled Indian batters and is expected to do the same. His stats are staggering as he has picked 51 wickets in 39 ODIs.