IND vs NZ Today Match Prediction for India vs New Zealand 3rd ODI– Who Will Win IND vs NZ match? 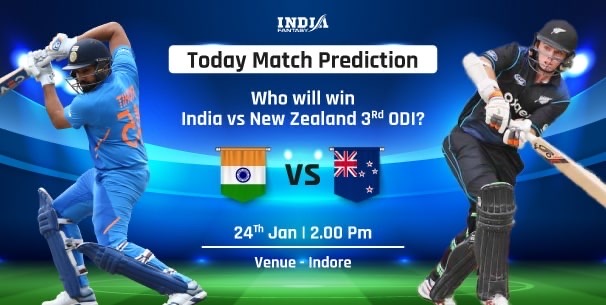 IND vs NZ 3rd ODI: India has already sealed the three-match series against New Zealand. Team India displayed two sensational performances and bagged the series. With one more game left, their sole focus will be to attain the whitewash whereas New Zealand on the other hand would want to play for the pride and end India vs New Zealand ODI series on a high.

The pitch at the Holkar Stadium, Indore is mostly in favour of batters. With boundary dimensions being short and wicket offering great bounce, it’s a paradise for bat. The ground has been a host to 5 ODI games so far which has seen 3 games being won by teams batting first and 2 being sealed by teams chasing. The captain winning the toss would want to bat first as it’ll best time to extract the conditions.

Indian batter Virat Kohli is expected to be the best batter in the third game between India and New Zealand. The batter missed on a big scores in the two games and with series already in bag, he can play freely. His stats in ODIs are excellent as he has 12773 runs in 270 games at an average of 57.8

New Zealand spinner Ishan Sodhi missed the first two game due to injury but it is expected to be the best bowler in the third ODI between India and New Zealand. The leg-spinner has often troubled Indian batters and is expected to do the same. His stats are staggering as he has picked 51 wickets in 39 ODIs.

IND vs NZ Prediction – Who Will Win Today’s Match Between India and New Zealand?