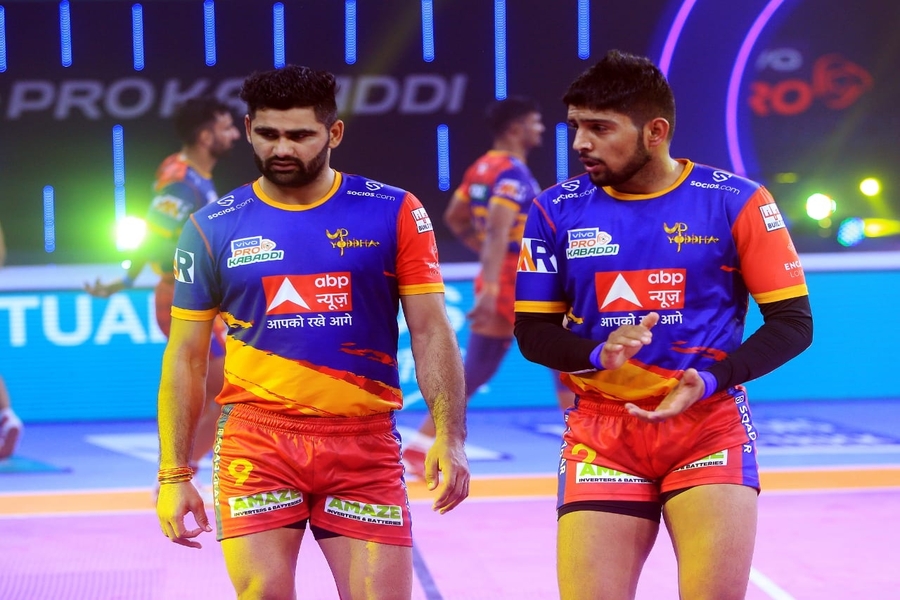 UP vs TAM Dream11 Prediction: The UP Yodha and Tamil Thalaivas will feature in the Match 33 of the Pro Kabaddi League 2021/22. Both the teams have 1 win in 5 matches of this edition, and tied their last league match. They need a terrific performance from their key players in order to get much needed win. The players to watch out will be Manjeet from Tamil Thalaivas, and Pardeep Narwal from UP Yodha.

UP Yodha vs Tamil Thalaivas

WATCH UP vs TAM Live Score

Watch UP Yodha vs Tamil Thalaivas live on Disney+ Hotstar

UP vs TAM Dream11 Prediction for Today Match

The UP Yodha team have tried their level best, but have not been able to display break out in their performances. They tied their last league match against U Mumba with a score line of 28-28. The team fared better in raids, with 30% success rate, and 55% in tackles. They were the better the team but the opposition secured 4 All out, which certainly made the difference, and game ended in a draw. The best performers for the team were Surender Gill with 8 points, and Sumit with 6 points.

The finest raider in Pro Kabaddi League has performed well in the tournament, and is expected to improve as the season progresses. He has 31 successful raids, with 31 Touch Points and has registered 2 Super 10s and can be the captain pick.

Another experienced campaigner, who has been a good support to the team in this season. In total of 54 raids, he has been successful in 23 of them with 2 Super Raids and 1 Super 10s.

The Tamil Thalaivas have been impressive, but their luck of not keeping nerves in control in pressure situations have not let them secure enough victories. In the last fixture, they played quite well against strong Delhi team with a score line of 30-30. The team had 39% and 37.5% success rate in raids and tackles respectively. They could not generate all out points or extra points, which could prove to be crucial as well. The best performers for the team was Manjeet with 10 points, while Sagar defended well to fetch 6 points.

One of the brighest talent to come out of Pro Kabaddi League, Manjeet has displayed fine agility and strength off the mat. In 5 matches of this season, he has 32 successful raids, with 2 Super Raids and has 1 Super 10s to his name.

The talented player was impressive in the last fixture, and will look to continue the same form in the tournament. Out of 24 raids, he has earned points for the team in 10 of them, with 1 Super Raids and 1 Super 10s.

In the last season, the both teams had 1 tie match, and UP Yodha secured a big victory in one of them. It is expected that the UP Yodha will win this game as well due to the experience and talent of their players. But, this fixture will be quite interesting as both the teams have same wins in the tournament, and will look to break out and rebuild the momentum.

UP vs TAM Dream11 Team Prediction