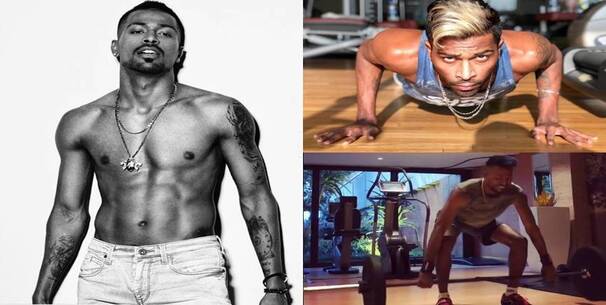 Hardik Pandya Fitness: Star Indian all-rounder, Hardik Pandya staged an inspiring comeback after a severe back injury. Hardik arrived as a prominent name and proved his worth by winning games for India. However, he was out of action for a long time after sustaining a serious injury during the Asia Cup. He went through surgery and came back stronger and better. During his recovery, Hardik made a lot of changes to his diet and fitness regime in order to recover fully. Let’s have a look at his complete fitness regime.

Hardik Pandya has a lean body with a high metabolism. During his struggling days, he used to survive on a small packet of instant noodles. Hence, he has developed a lean body over the years. His height is pretty tall, and he usually generates his power from his forearms. Post making debut in the Indian cricket team, Hardik has paid extra attention to his fitness and draws inspiration from the fittest player in the team, Virat Kohli.

Hardik spends a sizeable amount of time in the gym. He focuses more on the core body strength rather than focusing on any particular area. He starts the gym sessions with a good cardio warm-up. After that, he shifts to deadlifts and squats. Along with this, his regime also includes push-ups, pull-ups, and bench presses. Hardik Pandya also does Pilates during the off-season to maintain good flexibility. On match days, he starts with the traditional warm-up, which is doing multiple circles on the ground. Post that, he participates in regular practice drills.

These small changes in the workout regimes have helped Hardik with his bowling speed. Earlier, he could only bowl at a maximum speed of 135 kmph. However, post these changes in his regime, he is clocking 140–145 kmph consistently.

When it comes to his diet, Hardik likes to keep his meals balanced. He keeps his protein intake options open with both non-vegetarian and vegetarian items. Pandya consumes eggs in the morning and a good amount of chicken for dinner. Apart from that, he also prefers to eat leafy vegetables in either boiled form or in the form of a nice hot soup. He also intakes fresh fruits to keep the sugar levels in check. He said that Virat Kohli has helped him a lot in understanding what type of food his body needs. Hardik has discovered a lot over the years and maintains discipline in his diet and workout regime.