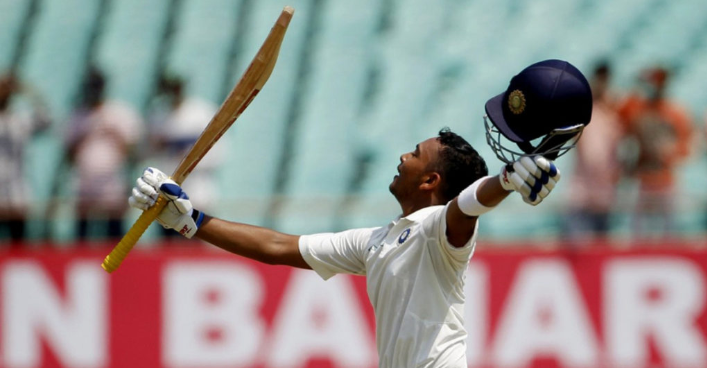 From our 100 to yours! It’s always a good start… the very best to you @PrithviShaw #Dial100 pic.twitter.com/G6BRVK0FAy After notching his dream Test cap, Prithvi Shaw scored a record-breaking ton on his debut match in Rajkot against Windies. Cricketing greats started praising the little champ on his scintillating century, so does Mumbai Police. Their (Mumbai Police) local boy etched his name on the record books that made them so proud to praise. In a tweet posted by Mumbai Police’s official Twitter account which goes viral after they used their witty sense of making people aware of the service yet making it special for the young cricketer.

From our 100 to yours! It’s always a good start… the very best to you @PrithviShaw #Dial100 pic.twitter.com/G6BRVK0FAy

It can only be expected from Mumbai Police said a Twitter user on the take of the department. It was a great day for Indian Cricket when their lad made his debut which was awaited from years. It may be a stellar performance for the fans, but Prithvi is pretty comfortable scoring centuries on debuts. Right now, Prithvi is the only player who scored a century on Ranji Trophy debut, Duleep Trophy debut and Test debut.

The way Twitter reacted on the young bloke’s performance, it shows that Indian fans were waiting for him to come and shine on.

Another video of Shaw also got viral where he was reacting on the Tweets shared by the cricketing stars. He said, “I was thinking about my Dad, as he has sacrificed a lot… My debut hundred… it’s for him… Whenever I score… wherever I score, it is for him” Prithvi told to broadcasters.

Shaw nodded on being asked about nervousness. He said yes, I was a bit nervous, but I released the pressure after scoring first four at the crease.

Sachin Tendulkar, Sunil Gavaskar, Courtney Walsh were among the greats who first praised the young cricketing lad through Twitter. Gavaskar goes even broader on Prithvi’s skills of scoring.

I am Sports Fan precisely Cricket, Football, Tennis. I want to give my life to the sports media so that India will become a Sporting nation soon.
Previous ArticleFirst Indian teenager to get hundred on debut and all records Shaw broke
Next ArticleKohli’s reaction when fans entered the ground to take selfie with him