WATCH: Pakistan Cricket at its hilarious best! Run Out after batsmen run to same end 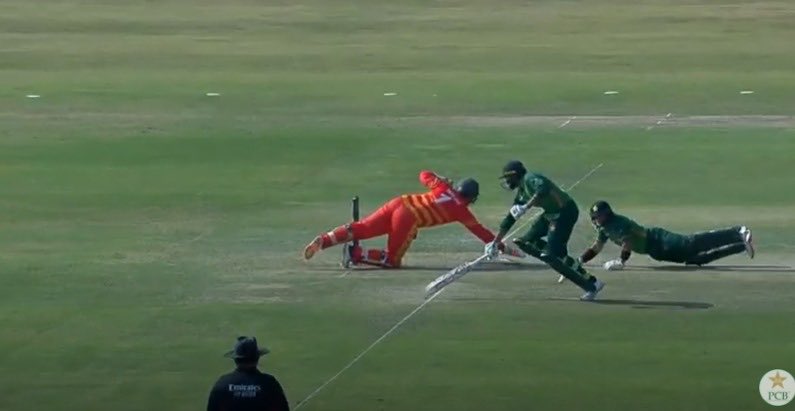 International cricket resumed outside the UK and this time it’s in the cricket crazy land of Pakistan. The Pakistanis have welcomed Zimbabwe for a limited overs tour of 3 ODIs and 3 T20Is. It’s a shame that the crowd could not be present due to the corona virus situation but the Pakistan fans deserve to see their national team after a long season of National T20 cup.

Comedy of errors sees the back of Imam ul Haq

Pakistan cricket was at their hilarious best as they managed to come up with a comical piece of running between the wickets. The partners in crime was opening batsman Imam ul Haq and other left hander Haris Sohail.

During the 26th over of the first innings, Imam ul Haq steered a short of length delivery from spinner Sikandar Raza to backward point and hinted to set off for a quick single. But he was ball watching all the way through and there was no loud communication sent through.

The non-striker Haris Sohail set off quickly for a single and ended up in the strikers end while Imam ul Haq returned to his crease and put in a valiant dive only to see Haris Sohail reach his crease before him. In the interesting turn of events, keeper Brendon Taylor failed to collect a wide throw and the square leg fielder backed up to field and throw the ball to the bowler who removed the bails and celebrated without knowing which batsman was out but knew one of them was a gonner.

Watch the incident in the below video

Pakistan put up a par score

At the end of the allotted 50 overs Pakistan put up a score of 281/8 with the hilarious run out survivor Haris Sohail top scoring with 71 runs.

The cameo from all rounder Imad Wasim towards the end helped them put a par score which should be enough for the bowlers to defend if they bowl well.

Taking the life out of me is better than taking cricket from me. Welcome to my world which gives nothing but happening stories in the cricketing world
Previous ArticleWATCH: Nitish Rana greets MS Dhoni with folded hands, gets Jersey from CSK skipper
Next ArticleWATCH: Jofra Archer clean bowls Chris Gayle on 99, Universe Boss throws bat in frustration