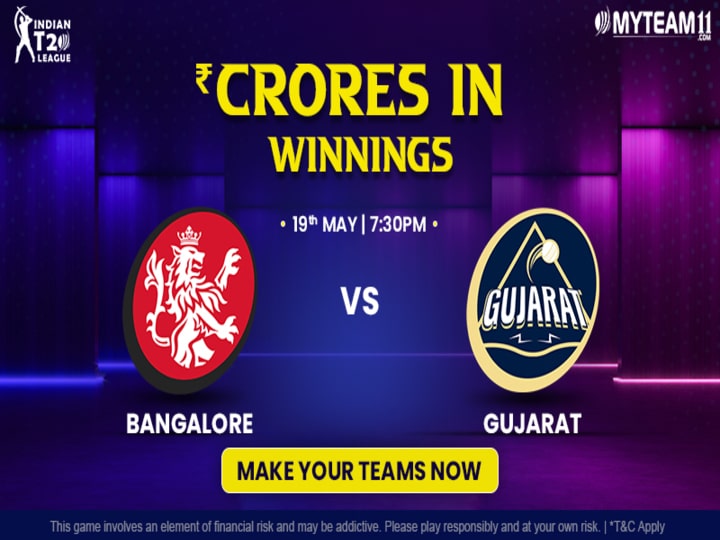 Bangalore and Gujarat will battle it out in the 67th match of the Indian T20 League Premier 2022. Both the teams have been impressive throughout the tournament. However, Gujarat has been on top of the table for the most part of the tournament.

Bangalore would look to get back to the top four spot and seal their deal in the playoffs. Surely, this match will be a nail-biter and the fans are really pumped for it.

Bangalore was sitting comfortably as one of the top four positions in the points table. However, now, the men in red have to work really hard to get back to the place they once were.

In the last match, Bangalore lost the match to the Punjab team with a big margin of 54 runs. Once feared batting lineup of Bangalore has been out of rhythm in the last few matches. Openers Faf du Plessis and Virat Kohli haven’t clicked together so far in the tournament. Virat Kohli’s form this season has been the worst phase of his career. Throughout the tournament there have been multiple instances when the former captain Bangalore was sent back to the dressing room after 0 runs.

Dinesh Karthik has been the backbone of the batting division in the middle order. The wicketkeeper has smashed the ball out of the park multiple times so far in this season. Karthik has scored 285 runs with an average of 57.00.

The bowling unit has been decent for the team. Josh Hazlewood has been consistently picking wickets for the team. Moreover, Mohammed Siraj and Harshal Patel has been ecomimcal with the white bowl in their hands.

Gujarat has secured its position in the playoffs. Currently, the team is sitting currently at number 1 position with 20 points to their name.

In the last match, Gujarat proved to the world why they are a major candidate for the Indian T20 League 2022 title. The team beat the mighty Chennai in the last game by 7 wickets.

Wicketkeeper Wriddhiman Saha has become the cornerstone of the batting division in the opening. In the last match, Saha scored another half century of this tournament and remained not out till the end of the innings. Gujarat is in a comfortable position at number. This means that the team will get 2 chances to win the cup, once the playoffs starts.

Wankhede Stadium in Mumbai is a high-scoring ground. The average 1st innings total at the stadium in T20Is is 192 while the average 2nd innings total is 184. The pitch supports batters but also assists bowlers as the match progresses.

Suggested Playing XI No.1 for Bangalore vs Gujarat MyTeam11 Team:

Suggested Playing XI No.2 for Bangalore vs Gujarat MyTeam11 Team: