Virat Kohli’s team India will look to wash off the disappointment of the world cup and start fresh when they take on West Indies in a three-game T-20 series beginning August the 3rd. While the first two T-20’s take place at Central Broward Regional Park Stadium Turf Ground, Lauderhill, Florida, Providence stadium in Guyana will play host to the series concluder. The games start at 19:30 hours IST.

Both teams put up an absolute thriller the last time they met at this Venue with the Windies running out victorious by only one run in a game where 489 runs were scored across the two innings.

Both teams have an eye on the upcoming World T-20, and the selections are reflective of it. The men in Blue have handed Navdeep Saini and Rahul Chahar their maiden call up’s after an impressive IPL season while T-20 specialist’s Washington Sundar, Krunal Pandya, and Manish Panday have also returned to the fray. Shikhar Dhawan has recovered from his thumb injury, which kept him out of the business end of the World Cup. Mahendra Singh Dhoni ruled himself out of contention for the series to carry out his duties as Lt. Colonel in the territorial army while speedster Jasprit Bumrah has been rested.

The Windies are set to welcome Sunil Narine after a long sabbatical from international cricket due to off-field issues and injury problems. The Series also marks the return of Kieron Pollard to the fold. Guyana Amazon Warriors’ wicket-keeper batsman Anthony Bramble has been given his maiden international call up after a decent showing in this season’s CPL. Chris Gayle has made himself unavailable for selection and would feature in Canada’s G-20 league instead.

Virat Kohli’s men should be the favourites going into the series on the back of a decent run in the world cup despite falling short in the semifinals.

With the return of Shikhar Shawan at the top and an extended batting line up till Krunal Pandya at 7, the Men in Blue pack a lot of firepower in their batting department.

Despite Jasprit Bumrah’s absence from the team, Indian Pace Battery is a right blend of experience and youth with Bhuvaneshwar Kumar present to mentor the likes of Deepak Chahar, Khaleel Ahmed, and Navdeep Saini.

India also has a plethora of options to choose from in the Spin department with Krunal Pandya, Ravindra Jadeja, Washington Sundar, and Rahul Chahar all in contention for selection.

Despite a very ordinary world cup campaign and an inexperienced squad, record world champions the Windies, can never be considered as minnows when it comes to this format.

The return of t-20 stalwarts like Sunil Narine and Kieron Pollard undoubtedly boosts a young captain in Carlos Braithwaite.

Braithwaite himself alongside  Kieron Pollard, and Keemo Paul form a potent triad of all-rounders who can all turn the game on its head at any point during the game.

The left-handed batting duo of Shimron Hetmyer and Nicolas Pooran will be critical to West Indies’s chances as they’ll be expected to the majority of batting against a new looking Indian attack.

Rohit Sharma: With the ominous touch his highness Rohit Sharma is in, he’d be the very first pick in every sensible cricket fan’s fantasy team. The Hitman amassed a whopping 648 runs at 81 which included five centuries.

Virat Kohli: Virat Kohli’s world cup campaign was underwhelming despite him scoring 443 at 55.37 because of the ridiculously high standards he has set for himself. Kohli who averages 50.29 in the shortest format of the game is not someone who you’d overlook when it comes to picking your fantasy team.

Kieron Pollard: The Mumbai Indian’s star has been in good nick during the Canadian GT20 League scoring 90 runs in three outings at an average of 45 and a strike rate in excess of 175. He has also taken up bowling after a long time making him a difficult customer to leave out of your fantasy XI.

Players to Watch Out:

Navdeep Saini: With stellar backing from the likes of Dale Steyn and Gautam Gambhir, Saini has bagged a spot in the Indian squad on the back of a decent IPL campaign where took 11 wickets at an economy of 8.27, often doing the job for his captain at the death.

Evin Lewis: Despite a measly run of recent form, Lewis has a particular liking for Indian Bowling. He is the top scorer in this fixture with 232 runs in three games. He has two t-20 centuries to his name against India, one of which was 49 ball hundred 100 he scored at the same venue when the two sides last met in 2016. 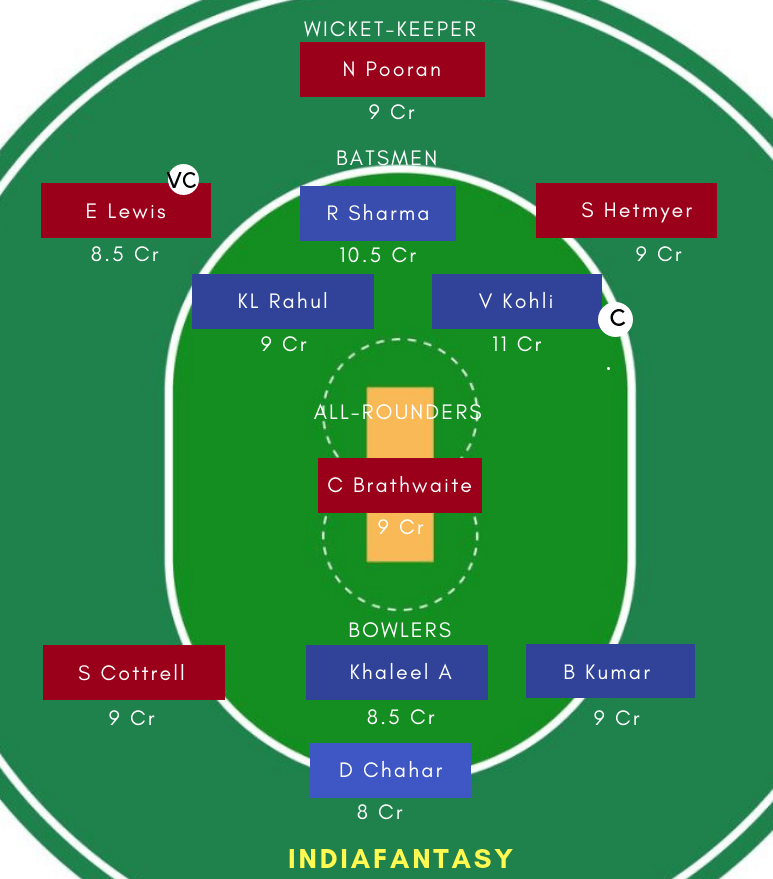