KXIP vs RR Dream11: Kings XI Punjab takes on Rajasthan Royals at Abu Dhabi amidst the tussle for a playoff spot.
Kings XI Punjab have staged an emphatic turnaround after being placed at the bottom of the points table during the halfway stage. They are on a 5-match unbeaten streak defeating some of the table-toppers along their journey on the back of a rejuvenated bowling unit and if KXIP manages to win both their remaining games there’s even a chance for them to finish at top two.
Rajasthan Royals, on the other hand, have struggled to identify an ideal combination all through the tournament and find themselves placed at the 7th spot in the points table. Their chances of qualifying to the playoffs even if they manage to win their final two league fixtures remains bleak with a negative NRR of -0.505. The last time these two teams face each other, Tewatia did the unbelievable to pull off a heist at Sharjah. How the KXIP’s famed batting unit negates the Archer threat will be the deciding factor of this match.

Injury update, unavailability: M Agarwal was seen practising in the nets and is most likely to return to the side after missing out the last couple of games due to an injury.

Team Combination: G Maxwell has struggled with the bat all through this season with him not hitting a six yet but KXIP are likely to stick with him mostly due to the lack of options and the off-spn bowling option he provides.
D Hooda will find himself out of the eleven when Mayank returns with M Singh dropping down to the middle-order in KXIP vs RR  Dream11 Team Prediction. 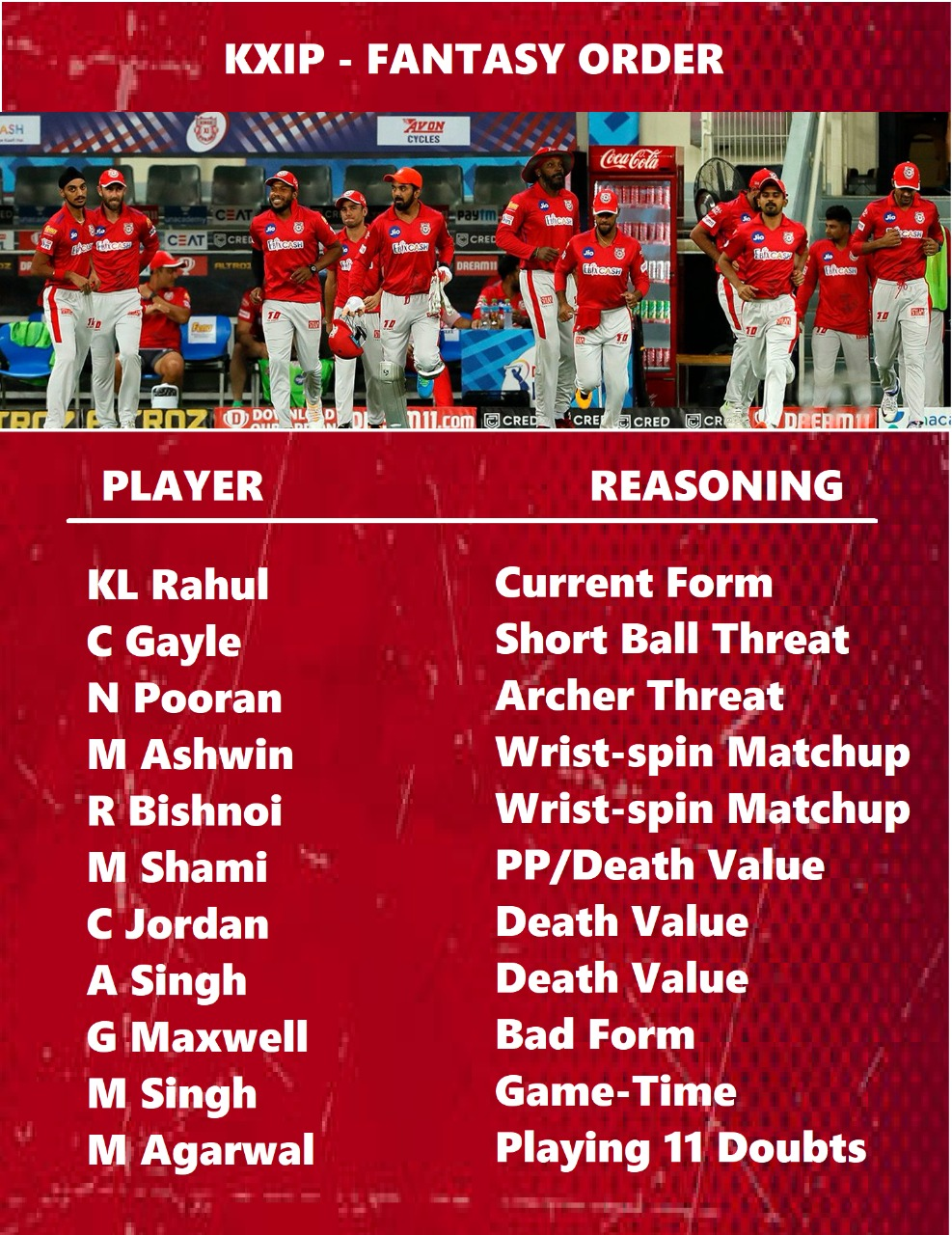 Team Combination: The fifth bowling option has been a headache for Rajasthan Royals with them trying as many options as they could. The decent fast bowlers available are all overseas players, while the Indian counterparts have been unimpressive. With Rajpoot conceding 60 runs from his 4 overs last game, RR will replace him with Akash Singh who hasn’t been tested yet or with some other Indian pacer. Kings XI Punjab are firm favourites going into this contest with their current form and their batting might which will be strengthened more with the return of M Agarwal. They also have the wrist-spinners to trouble the RR batsmen who are vulnerable against that particular bowling type. Rajasthan Royals meanwhile has to utilize the Powerplay well with both bat and ball by either picking wickets with the new ball or scoring big enough in the Powerplay to give themselves enough cushion against KXIP’s wrist-spinners. So KXIP are the favourites in KXIP vs RR Today Match Prediction.

KL Rahul – The Orange Cap holder has been in terrific form this season and adds fantasy value with his keeping too. His head-to-head numbers against Archer looks solid, while the wrist-spin threat will be neutralized with Gayle, Agarwal and Pooran batting alongside him.
KL Rahul in IPL 2020: Runs – 595, Average – 59.50, S/R – 132.22
KL Rahul against J Archer in T20s: Runs– 78, Balls – 46, Outs – 0

B Stokes – He took some time to get used to the new opening position for Rajasthan Royals but he proved the move right by scoring an unbeaten 107 against Mumbai Indians last game. His struggles in IPL are mostly against the wrist-spinners but he should cope well given the Powerplay cushion.
B Stokes in last 5 T20 matches: Runs – 212, Average – 53
B Stokes against wrist-spinners in all T20s: Runs –148, Average – 13.5

N Pooran – The pocket-sized dynamite is one of the top T20 batsmen in the middle-overs phase capable of scoring at a quicker rate without compromising his wicket. He has his issues against high-end pace but his position in the batting order helps him to maximize his opportunities against the spinners.
N Pooran in IPL 2020: Runs – 329, Average – 41.12
N Pooran in Overs 7 to 16 in all T20s: Runs – 1765, Average – 35.3, Strike-Rate – 139.00

S Smith – He hasn’t been at his best this season and the meddling of the batting positions hasn’t helped him either. With the presence of two wrist-spinners in KXIP squad, there’s a possibility of him coming in earlier where he can play the anchor role.
S Smith in last 5 T20 matches: Runs – 114, Average – 28.5
S Smith against Kings XI Punjab: Runs – 253, Average – 31.63

M Ashwin – Rajasthan Royals are one of the most vulnerable batting units against wrist-spin and it helps that M Ashwin is in good form. Expect him to be amongst the wickets in KXIP vs RR Dream 11 Prediction.
M Ashwin in last 5 matches: Wickets – 5, Average – 27.6

S Gopal – He has been bowling good so far this tournament but the wickets haven’t come in large numbers. It’s a definite risk picking him with the likes of Gayle, Pooran and Agarwal in the opposition but his numbers in Abu Dhabi is impressive.
S Gopal Bowling numbers in Abu Dhabi: Wickets – 6, Average – 16.5

A usual cricket watcher with an unusual take on the game. My opinions on cricket are like soft-signals, it will stay the same until/unless someone comes with conclusive evidence.
Previous ArticleUCC vs FZL Dream11 Match Prediction United CC Girona vs Hawks CC ECS T10 Barcelona 30 October
Next ArticleWAR-XI vs CPN-XI Dream11 Match Prediction, Karbonn Andhra T20, Warriors XI vs Champions XI, 30 October