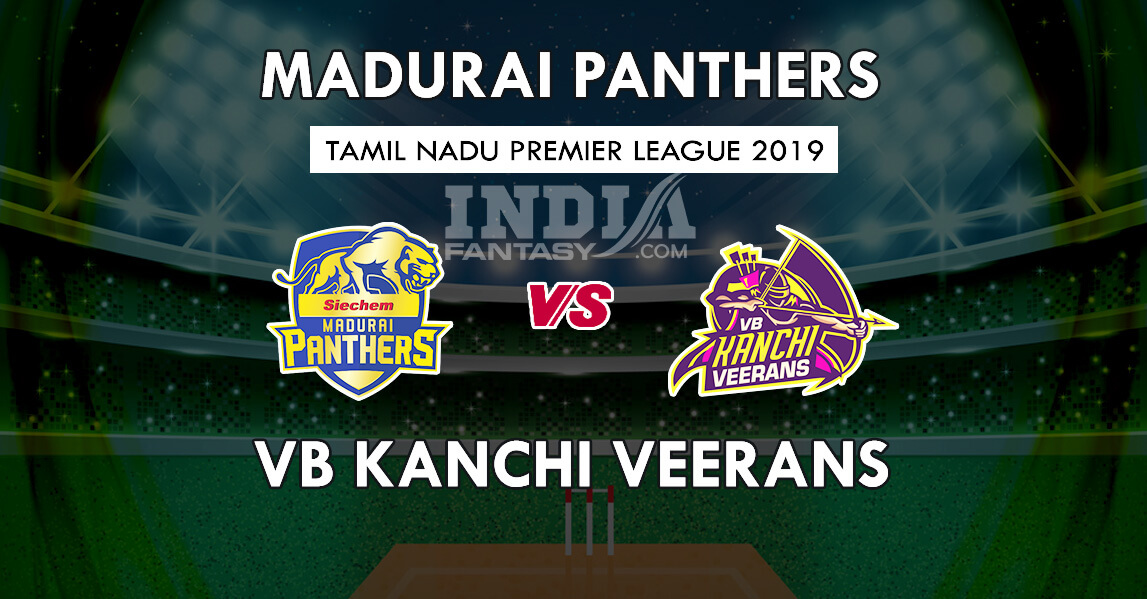 The TNPL 2019 is in its business end with the Eliminator scheduled to be played between Madurai Panthers and VB Kanchi Veerans at Tirunelveli on Sunday evening.

It’s a must-win game for both the sides as it will be the end of the campaign for the losing side while the winning side will have to face off the loser of Qualifier 1 to secure a place in the final.

Dindigul Dragons and Chepauk Super Gillies will be locking horns in the Qualifier 1. The final of the tournament will be played at MA Chidambaram Stadium, Chennai on Thursday.

The two teams met at the same venue on July 28 in the 12th fixture. Having opted to bat first, Madurai Panthers managed 138-9 with the much needed 39 of 36 from skipper Shijit Chandran. R Silambarasan was the pick of the bowler from Kanchi Veerans, finishing for 5-17.

In reply, VB Kanchi Veerans’ run chase was powered by skipper Baba Aparajith’s 44 of 41 deliveries and wicketkeeper Suresh Lokeshwar’s 51 of 42. Veerans chased down the target with seven wickets in hand and an over to spare.

It is going to be a typical sub-continent wicket which will remain slow throughout the course of the game. Batsmen will have to wait for their opportunities to get going.

With 281 runs in 7 innings, Arun Karthik is the leading run-scorer for the side

J Koushik, A Sarath Raj and PS Chandran are other key scorers in the side

S Lokeshwar, R Sathish and R Sanjay Yadav are other key contributors with the bat

K Gowtham Thamarai, R Sathish and R Silambarasan are the leading wicket-takers in the side