Spain started the world up as favourites and in their first game against Portugal, Cristiano Ronaldo destroyed the Spanish defense and ended the match with a 3-3 score, scoring a hattrick for his country. Spain was on the driving seat in their first game as they took on the lead but a pure brilliance from a set piece from Cristiano Ronaldo only gave them one point of that game. However, in their second game Spain was back in their old form and dominated the game keeping a possession of 71%. Spain and Portugal are in a tie position with the points and goal difference so Spain would have to win this match at any cost if they are to play in the knockout stages.

Morocco would be playing this game for pride after being unfortunate in their first game and lost the match due to an own goal, the second match against Portugal didn’t turn in their favour as well. Despite playing better than Portugal in the entire game they fell short of an early Cristiano Ronaldo header that crushed their world cup dream. Morocco will try to give everything in this game even if they know they are going to lose. Football can be a cruel game and even for a small mistake the highest price had to be paid.

This FIFA World Cup 2018, Group B, 3rd match is to be played at Kaliningrad Arena at 1900 hours in Local time. A thrilling game awaits everyone on Match Day 11 for everyone and can be watched live on Sony LIV.

Important updates:
17:55 pm,
Lucas Vazquez could be dropped in this match with Koke replacing him. The 2010 Champions have no injury problems with Dani Carvajal having returned at right-back against Iran.

Morocco’s Nordin Amrabat defied expectations to feature against Portugal despite having suffered a concussion in the opening game against Iran.

The Leganes forward is likely to feature once more although Monaco midfielder Youssef Ait Bennasser is likely to miss out with a thigh injury. 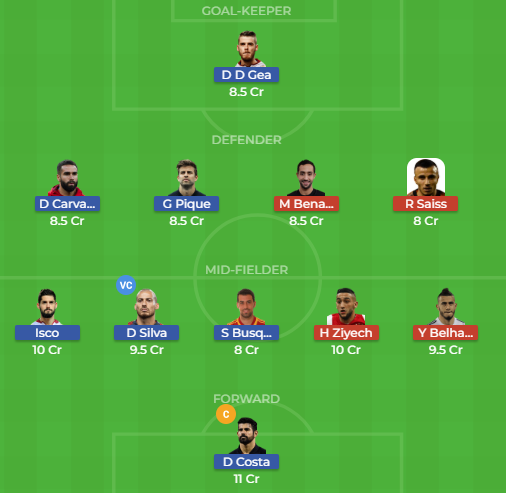 NOTE: THIS ESP vs MOR Dream11 MATCH PREVIEW IS BASED ON OUR RESEARCH AND UNDERSTANDING FROM VARIOUS NEWS SOURCES. YOU CAN SELECT YOUR OWN PLAYING 11 ON THE BASIS OF TEAM NEWS.

THIS ESP VS MOR MATCH PREVIEW IS BASED ON OUR RESEARCH AND UNDERSTANDING FROM VARIOUS NEWS SOURCES. YOU CAN SELECT YOUR OWN PLAYING 11 ON THE BASIS OF TEAM NEWS AND ALL THE OTHER INFORMATION REQUIRED FROM THIS WEBSITE. USING OUR TEAMS IN ANY CONTEST WILL INCREASE THE PROBABILITY OF HAVING THE SAME EXACT TEAM WITH OTHER USERS CAN LEAD TO THE WINNINGS SPLIT.