We are now into the business end of the week in the Premier league and except Manchester City at the top, Stoke City at the bottom and few other teams in the mid-table, teams still have everything to play for.

With 44 points from 36 games, Leicester City are 9th in the table. The foxes are the in the middle of a pathetic run as they won just once in the last six games. But the real cause for concern for their fans and manager would be their home form. The 2015-16 Champions have failed to win any home league in the Premier League since winning 2-0 against Watford on 20th January.

Claude Puel’s position has come under a lot of threat due to the indifferent form. But he could still guide his team to a top-half finish with a win in any of the two games remaining. That would be a good finish which would help lay a good foundation for the next season.

Arsenal, on the other hand, are 6th in the table and neither can’t finish above or below from their current position in the table. They scuppered a golden chance to win the Europa League which would have been a fitting end to Arsene Wenger’s reign.

But the Gunners would be keen to give their manager a winning end, so expect a full-throttle approach from the visitors in this match.

Leicester City: Leicester City boss Claude Puel has informed the media that the club will be accessing the fitness of Vicente Iborra ahead of their fixture against Arsenal.

While Matty James, Wilfred Ndidi, and Robert Huth all have been ruled out from this match due to their injuries.

Mohamed Elneny, Laurent Koscielny and Mesut Ozil are injured for the Gunners, while Santo Cazorla is lacking match fitness, so he won’t be featuring either. 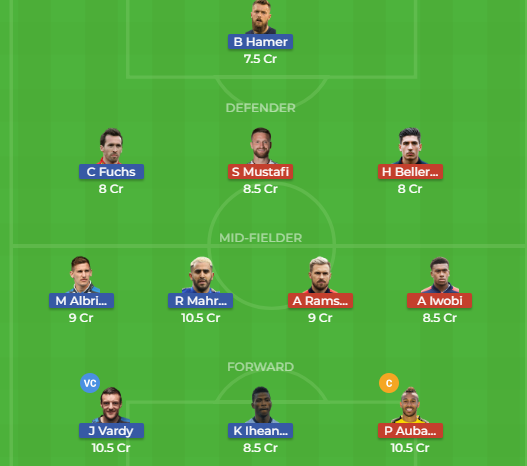 Leicester City have a recent bad record at King Power Stadium and we expect them to struggle in this match a bit.

Our prediction is – Arsenal not to lose.

NOTE: THIS LEI vs ARS Dream11 MATCH PREVIEW IS BASED ON OUR RESEARCH AND UNDERSTANDING FROM VARIOUS NEWS SOURCES. YOU CAN SELECT YOUR OWN PLAYING 11 ON THE BASIS OF TEAM NEWS.