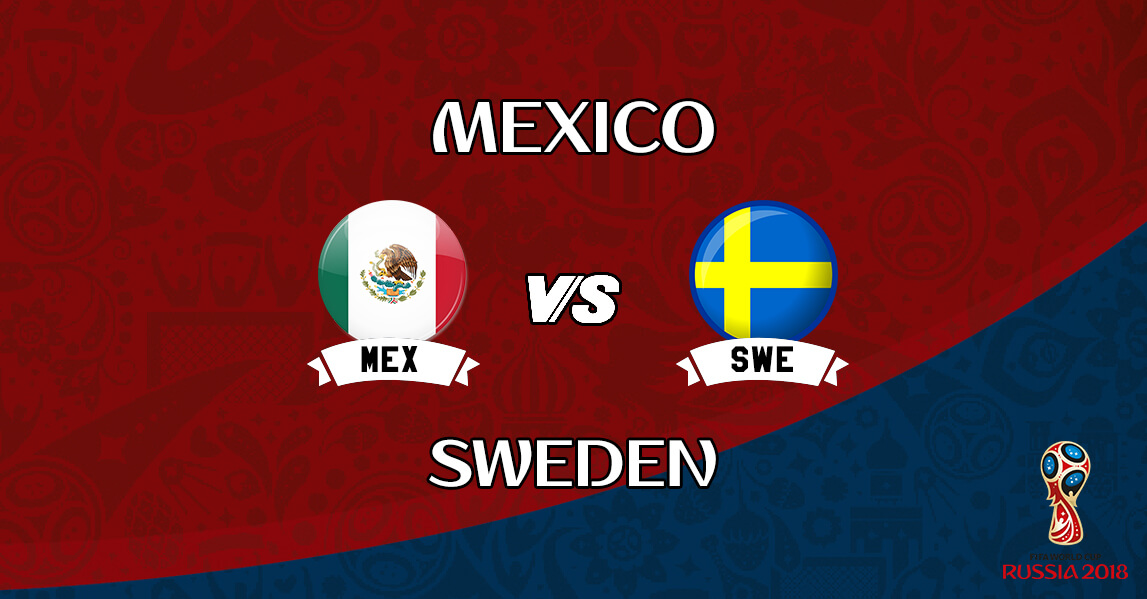 All eyes would be on Sweden because there is still a hope for them to progress to the next round if they can manage to pull a win in this game and they have been unfortunate not to win against the 10 man Germany in their last game as Toni Kroos’ stunner left them high and dry. However, Sweden lost that game because they were looking for a draw in that game as well and they would have settled for that but Kroos’ goal changed everything. Now they have to win this game at any cost but against Mexico, it won’t be that easy.

Mexico started their world cup journey as one of the bottom dwellers in their group, making a world cup exit after the first round and in their first game they had to face the defending champions. Mexico was never considered to be the winning team but their swift counter attacks tore down the German line of defense and with a brilliant goal from Hirving Lozano, saw them through as winners. In their second game they faced South Korea and it remained to see if the Mexicans were really more than one match wonder and they did deliver. They broke the Koreans with their swift counter attacks and scored two goals against them while conceding one in the last moments. Now that, Mexico has already qualified for the Round of 16, they may take a different approach to this game and how that play out for Sweden also remains a question.

This FIFA World Cup 2018, Group F, 4th match is to be played at Ekaterinburg Arena, Ekaterinburg at 1500 hours in Local time. A thrilling game awaits everyone on Match Day 13 for everyone and can be watched live on Sony LIV.

Sweden: Sweden is also believed to start with the same starting lineup that played against Germany.  Victor Lindelof is expected to start in this game.

Mexico need a draw in this game to secure a top spot in their group. Coach Juan Carlos Osorio said his team would continue to play the attacking football which fetched them 6 points from the 1st two games.
There are no injury concerns but we could see some changes with both Marco Fabian and Jesus Corona pushing for a start in this game.
Sweden are also without any injury concerns. But Sebastian Larsson, Viktor Claesson, and Albin Ekdal are one booking away from suspension.

Mexico are in the driving seat to land a last-16 at the top of Group F, but aren’t guaranteed a place in the next round just yet. A draw will be enough to secure a spot in the knockout stages, though Osorio will be looking to all three points here. Sweden were desperately unlucky to not secure a point against Germany with a late Toni Kroos goal denting their chances of progression. Sweden may be defensively sound, but Mexico have the attacking means to break them down in this one and send their European counterparts home.

NOTE: THIS MEX vs SWE Dream11 MATCH PREVIEW IS BASED ON OUR RESEARCH AND UNDERSTANDING FROM VARIOUS NEWS SOURCES. YOU CAN SELECT YOUR OWN PLAYING 11 ON THE BASIS OF TEAM NEWS.

THIS MEX VS SWE MATCH PREVIEW IS BASED ON OUR RESEARCH AND UNDERSTANDING FROM VARIOUS NEWS SOURCES. YOU CAN SELECT YOUR OWN PLAYING 11 ON THE BASIS OF TEAM NEWS AND ALL THE OTHER INFORMATION REQUIRED FROM THIS WEBSITE. USING OUR TEAMS IN ANY CONTEST WILL INCREASE THE PROBABILITY OF HAVING THE SAME EXACT TEAM WITH OTHER USERS CAN LEAD TO THE WINNINGS SPLIT.