The Blue half of Merseyside was brimming with confidence ahead of the start of the 2017-18 season. After all, Everton finished the 2016-17 Premier League campaign at a respectable 7th place, just 8 points behind 6th placed Manchester United, and a huge 15 points above Southampton who finished at 8th in the table. No surprise that the Toffees were hailed as the team of the ‘Best of the Rest’. Then came the summer, and Everton backed Ronald Koeman by spending around £150 Million on new recruits. So the expectations were sky-high and the punters backed them to break the Top-6 order of English Football.

But everything fall like a house of cards and Everton started the 2017-18 Premier League season so badly that at one point they were flirting with the relegation. This led to the sacking of Koeman and he was replaced by Big Sam, who has the experience of saving clubs from going down into the Championships. Though, Everton are safe now, he has hardly impressed anybody at the Goodison Park.

Everton are 9th in the table, behind the likes of Burnley and Leicester City heading into this match. The Clarets are almost out of their sight and that means, Rooney and Company can’t finish the season at 7th. So a Europa League qualification is out of the question. The best that the Blues can hope is to end the season on a high and lay the foundation for the next season.

Newcastle United, on the other hand, have racked up four consecutive wins on the trot and successfully saved their Premier League status for yet another season. If the Toons win this game, they will be moving above their hosts Everton in the table.

A lot of players are missing from Everton’s squad for this match. The list includes James McCarthy, Maarten Stekelenburg, Gylfi Sigurdsson, Mason Holgate and Eliaquim Mangala.  However, all these players have been out injured for some time now and we are expecting Sam Allardyce to name a same Playing 11 he selected against Swansea City.

Christian Atsu is the only notable absentee from Newcastle United’s matchday squad. 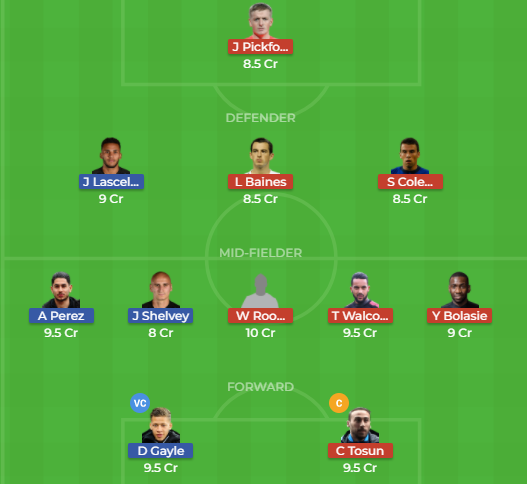 Newcastle United are in a very good form. They have won four in a row which includes a magnificent 2-1 win over Arsenal last weekend. However, their away form is a cause for concern for Rafa Benitez as his team has won just three times in the last 14 away matches. Also, Everton have been pretty solid at home and against the teams currently lying outside the top-6. So we are expecting a tough outing for the Magpies in this match.

NOTE: THIS NEW vs EVE Dream11 MATCH PREVIEW IS BASED ON OUR RESEARCH AND UNDERSTANDING FROM VARIOUS NEWS SOURCES. YOU CAN SELECT YOUR OWN PLAYING 11 ON THE BASIS OF TEAM NEWS.