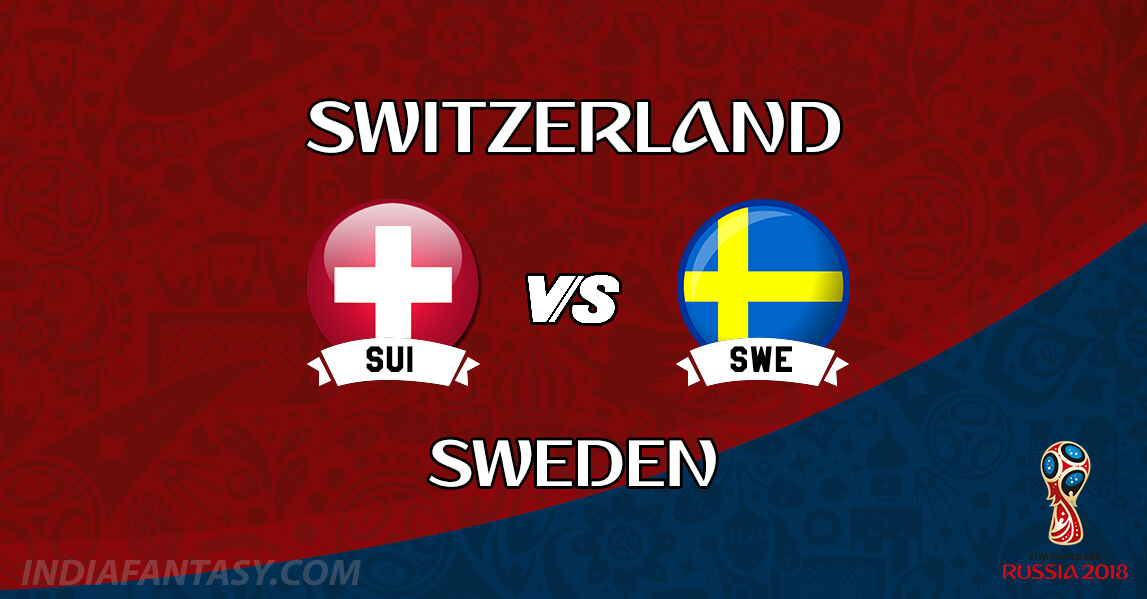 It has been a surprising Round of 16 so far, with already teams like German, Argentina, Portugal and Spain have been all eliminated by teams these teams didn’t expect it to be and in the end, football proved to be a team game and the whole team needs to deliver together at the right time. Not an individual putting in all the efforts while everyone else too. The teams that have won so far in the knockout games have put up a great team display with the effort of an individual included in it. And this game won’t be much different because of both Sweden and Switzerland; Sweden has been able to show great team play for some time now. After Zlatan Ibrahimovic took retirement, the Sweden team formed itself from there and has built up a strong team for this world cup.

To come into the world cup has not been easy for Sweden as they had to beat Netherlands to get a chance of playoff against Italy. In both the legs, Sweden beat the former World Champions by a score on 1-0, ending all hopes for Italy to compete in this participation. Even in the world cup, no one did expect that those to be the group toppers after being clubbed with Germany, Mexico and South Korea. However, this is the beauty of football that no team can really be sure of what’s happening on the ground. Sweden had a tough time against Germany in the second group game but them changed their attitude in the third games as they faced off against the former group winner in Mexico. Not only did they thrash the Mexico but also ensured that Germany are also out of the world cup. Sweden has shown great quality on the ground and is also expected that they would bring that confidence in this game and would make fools out of the Swiss.

On the other hand, being clubbed with teams like Brazil, Serbia and Costa Rica, Switzerland had to deliver in two games and they did despite going their first match against Brazil for a draw they managed to secure a spot in the Round of 16. Switzerland may not have dominated the games they have played so far but in their game against Serbia, they showed what they can do and it can be expected that in this game as they would push themselves to their limits.

FIFA World Cup 2018, Round of 16, 7th match is to be played at Krestovsky Stadium, at 1500 hours in Local time. A thrilling game awaits everyone on Match Day 18 for everyone and can be watched live on Sony LIV.

Sweden: The Swedes will be without the services of Sebastian Larrson’s in this game as he is already booked and cannot take part in this game. Gustav Svensson is expected to get a starting berth in this game. Albin Ekdal, Mikael Lustig and Viktor Claesson have to be very careful in this game because they are already booked previously and one more booking means they would miss out on their next game.

Switzerland: Both Stephan Lichsteiner and Fabian Schar are suspended and would not play this game. Steven Zuber remains the only injury concern for the team. Johan Djourou and Michael Lang are both expected to feature in defense. Breel Embolo could keep his place on the team sheet in this game as well.

Important updates:
Sweden named an unchanged XI in the last two group games but will have to make a change as Hull midfielder Sebastian Larsson is suspended for this clash. Two players are in contention to replace him with either Genoa’s Oscar Hiljemark or Seattle Sounders’ Gustav Svensson look like the likeliest candidate.
The wife of Sweden captain Andreas Granqvist is due to give birth on Tuesday, but he has hinted he will play regardless of any developments.

For Switzerland, defenders Fabian Schar and captain Stephan Lichtsteiner are both serving one-game bans. Michael Lang is expected to fill-in for Lichtsteiner at right-back, while Schar’s place at center-back is expected to go to either Johan Djourou or Nico Elvedi.
Neither Haris Seferovic nor Mario Gavranovic have convinced up front, so it remains to be seen who leads the line against the Swedes.

Sweden landed their spot in the last-16 courtesy of a 3-0 win over Mexico, which saw them progress as group winners. Few gave them a chance of making it out of the group, let alone topping Group F, and they’ll be confident of landing a quarter-final berth at Switzerland’s expense. Switzerland was held to a late 2-2 draw with Costa Rica on Wednesday night. However, the absence of key defenders Stephan Lichtsteiner and Fabian Schar, who both received their second bookings of the tournament in the stalemate, will hinder their chances of overcoming Sweden on Tuesday afternoon. This unlikely to be the glamour tie of the last-16, but it’s one that Sweden should edge.

NOTE: THIS SUI vs SWE Dream11 MATCH PREVIEW IS BASED ON OUR RESEARCH AND UNDERSTANDING FROM VARIOUS NEWS SOURCES. YOU CAN SELECT YOUR OWN PLAYING 11 ON THE BASIS OF TEAM NEWS.

THIS SUI VS SWE MATCH PREVIEW IS BASED ON OUR RESEARCH AND UNDERSTANDING FROM VARIOUS NEWS SOURCES. YOU CAN SELECT YOUR OWN PLAYING 11 ON THE BASIS OF TEAM NEWS AND ALL THE OTHER INFORMATION REQUIRED FROM THIS WEBSITE. USING OUR TEAMS IN ANY CONTEST WILL INCREASE THE PROBABILITY OF HAVING THE SAME EXACT TEAM WITH OTHER USERS CAN LEAD TO THE WINNINGS SPLIT.