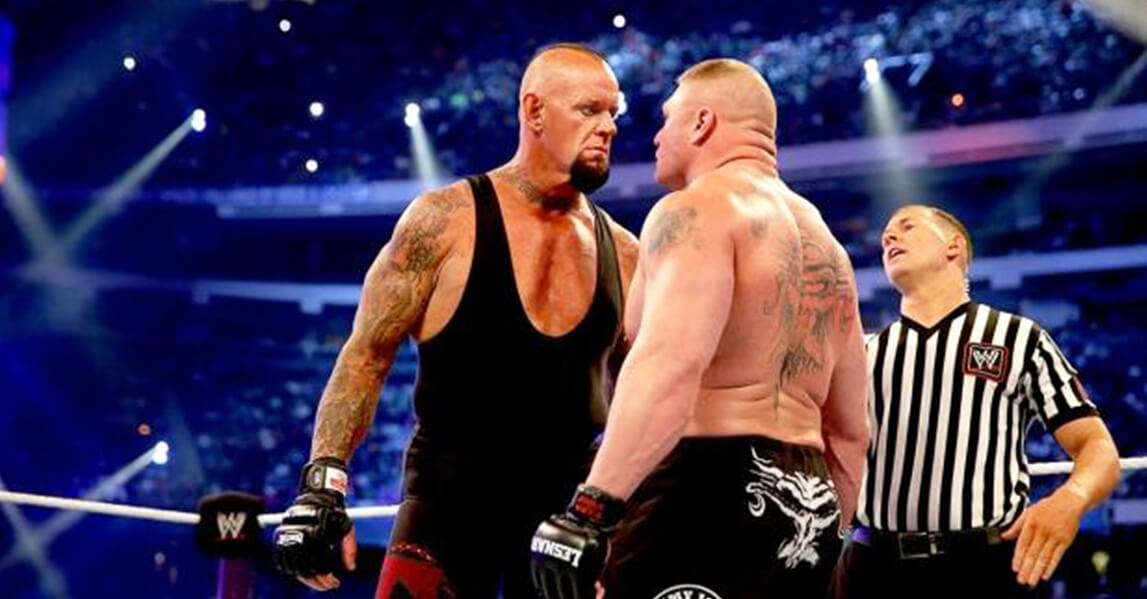 Wrestlemania is referred to as the ‘Grandest Stage of them All’ so naturally all the matches are of the highest quality. Naturally there are a few misfires but usually, every match at Wrestlemania has something to remember. A great match isn’t just filled with over-the-top spots and high impact action. It is crafted by months of storytelling, character building, motivation etc. The following are my picks for the 5 Greatest Wrestlemania matches of all time:

#5 Edge vs Mick Foley at Wrestlemania 22

This was a Hardcore match pitting the ‘Rated –R Superstar’ against Mrs. Foley’s baby boy. The match had everything, an amazing story with Mick trying to prove he still has it in the Hardcore category and Edge on his way to becoming a main event heel.

Some of the weapons used in this match included thumbtacks, barbwire, steel chairs, and tables. The highlight on one of the most legendary spots of all time, Edge spearing Mick through the ropes onto a burning tale.

#4 The Rock vs Hulk Hogan at Wrestlemania 18

Also referred to as The Icon vs Icon match pitting The Rock against Hollywood Hogan. Though not the most technical match, this one is remembered and praised because this match is a perfect example of what happens when a dream matches come to life.

The fans cheered the entire 20-minute long match, sometime for the Rock other times for Hogan.

Now many fans will try to ignore this match all due to the last wrestler in the title Chris Benoit. This was a fast-paced match pitting and one of the few triple threat matches as the main event of WrestleMania.

The match was epic in every sense of the word. Benoit and Shawn were regarded as two of the best technical wrestlers at the time and Triple H was known for his strength and endurance.

The highlight of this match was the post celebration of Benoit’s victory with longtime best friend Eddie Guerrero.

This match was the legend Ric Flair’s final match in the WWE who was 59 years old at that time. Two absolute legends facing off with Ric’s career on the line. The match was and will always be among the most emotionally intense matches ever.

Everyone knew how it was going to end but no one could’ve predicted how. With Shawn in the corner looking at a beaten Ric try his bet to get up. Shawn uttered the words ‘I’m sorry. I love you’ Then delivered a Sweet Chin Music to end the match.

#1 Shawn Michaels vs The Undertaker at Wrestlemania 25 & 26

Shawn isn’t called ‘Mr. Wrestlemania’ for nothing. The original match at Wrestlemania 25 or the even better one at 26 with Shawn’s career on the line defines what a magnificent Wrestlemania match should be like.

It was long, it was intense, it was filled with breathtaking spots and amazing storytelling and false finishers. It had action, emotion and is now and forever will be the definition of a perfect Wrestlemania match.

A wrestling fan since the age of 8. A John Cena mark and Demon worshiper. Never miss an episode, podcast or botch. When I'm not watching it I'm living it in Smackdown HCTP and 2k17 and Fortnite.
Previous ArticleFive epic moments from Wrestlemania over the years
Next ArticleFive epic WWE championship matches at Wrestlemania.