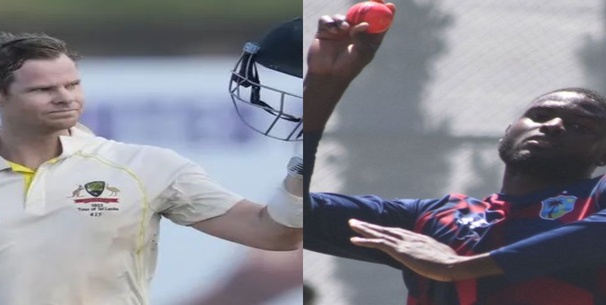 AUS vs WI Dream11 Team: West Indies are all set to play against the host Australian team in a short two-match Test series and the first Test match will be beginning from 30 November, 2022 (Wednesday) at the Optus Stadium in Perth. Australia have witnessed a total of 2 Test victories in the recent while that includes two draws as well while West Indies registered an amazing 3-0 series whitewash against Bangladesh at home earlier this year. A lot of star players from both the teams will be in action including the likes of Steve Smith, Pat Cummins, David Warner, Jason Holder and many others.

Australia’s Steve Smith looked in an incredible form during the recently concluded ODI series against England. The right-hander also scored a wonderful hundred during the last Test match in Sri Lanka on a challenging wicket. In his Test career so far, Smith has composed more than 8100 runs at a brilliant average of 60.01. He has also notched up a total of 36 fifties and 28 centuries in the longer format of the game. Therefore, the former Aussie captain will be an important player to watch out for in this first Test against West Indies.

West Indies senior all-rounder Jason Holder has been a consistent performer both in the batting as well as bowling departments. Holder has scored more than 2500 Test runs that consists of as many as 11 half-centuries and 3 hundreds. The right-arm fast bowler has picked up a total of 142 wickets from 56 Tests at an average of less than 30. The lanky Windies speedster has taken as many as 8 five-wicket hauls and 4 four-wicket hauls in Test cricket so far.

Aussie Test captain Pat Cummins has led the team from the front so far during his leadership stint so far especially with the ball. Cummins has picked up a total of 199 wickets from as many as 43 Test matches at a brilliant average of less than 22. He has taken 7 five-wicket hauls and 13 four-wicket hauls in the longest format of the game. The Australian skipper also picked up an amazing five-wicket haul during the Test series victory against Pakistan.

Marnus Labuschagne has been a consistent performer for Australia especially in the longer format of the game. The right-handed middle-order batsman has notched up a total of 2539 runs from 28 Test matches at an excellent average of more than 54. Labuschagne has smashed as many as 13 fifties and 7 centuries in Test cricket so far. He also has a highest score of 215 for Australia in his short Test match career.

West Indies skipper Kraigg Brathwaite has delivered some crucial performances for his side over the last few years in Test cricket. The Windies opening batsman has composed close to 5000 Test runs at an average of nearly 35. Brathwaite has notched up a total of 27 half-centuries and 10 hundreds in the longest format of the game. The West Indies captain has smacked as many as two fifties in his last 4 Test innings so far.

A cricket maniac who lives his life like a T20 match, time is short so make the most of it. Always thriving to learn more about cricket writing and obviously being an Indian, a big cricket expert.
Previous ArticleNZ vs IND Dream11 Team: Top 5 Fantasy Picks for New Zealand vs India 3rd ODI
Next ArticleTAD vs MSA Dream11 Prediction, Playing 11, Fantasy Cricket Tips – Abu Dhabi T10 League Dream11 Team for Today’s Match