DLH vs HIM Dream11 Team | Delhi vs Himachal Ranji Trophy 2018

DLH vs HIM Dream11 Match Prediction | Who Will Win Today Match

Delhi play their Ranji Trophy 2018-19 opener against Himachal Pradesh at Feroz Shah Kotla starting on Monday.
Delhi finished runner-up in the recently concluded Vijay Hazare Trophy. However, Gautam Gambhir has given up on the captaincy for the season as he felt that someone younger should be groomed for the job.
Himachal Pradesh, on the other hand, played out a draw in their first fixture of the season against Bengal. Pankaj Jaiswal and Ankush Bains put on decent shows with the ball and the bat in the first outing. They would be looking to come out positive and give it their all to register first win of the Ranji Trophy season.

DLH vs HIM Team News

Gambhir has stepped down as Delhi Ranji captain. Nitish Rana will take over the reins from Gambhir, and Dhruv Shorey will be Rana’s deputy.

Navdeep Saini is part of India A squad for New Zealand and will not feature here.

India A are off to New Zealand. All the best boys! #TeamIndia pic.twitter.com/gFYAWDICap

DLH vs HIM Playing 11

Here’s how the two sides may lineup for Delhi vs Himachal Pradesh Ranji Trophy match.

DLH vs HIM Squads

Join our Telegram Channel to get updates on your mobile IndiaFantasy ”

“Have you followed us on Twitter yet? It’s a great place Click here to check it out.

DLH vs HIM Dream11 Team

Pankaj Jaiswal and Ankush Bains contributed for Himachal in the tournament opener and would be confident taking the field.

Dhruv Shorey, Gautam Gambhir, Ishant Sharma, Kulwant Khejroliya and Nitish Rana, Delhi have some seasoned campaigners who can be backed to come good.

Navdeep Saini is part of India A squad for New Zealand and will not feature here. 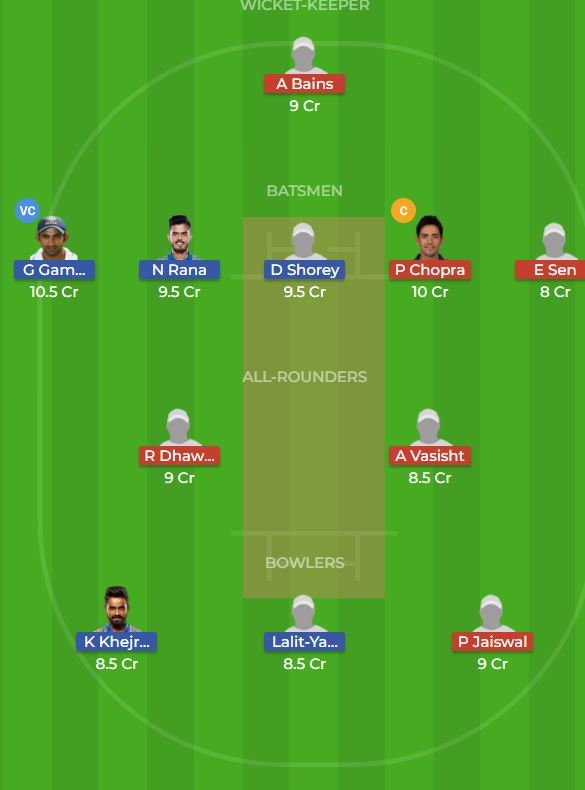