Both Baroda and Maharashtra would look to get their Ranji Trophy 2018-19 campaigns up and running when the two sides meet at Moti Bagh Stadium in Vadodara.

Baroda suffered a hammering at the hands of Gujarat in their tournament opener, going down by 9 wickets. A dismal performance in the second innings with the bat is what did them, as the hosts bundled for a partly 179. They must step up, particularly with the bat, to get a favourable result.

Maharashtra, on the other hand, played a draw in their first outing of the tournament against Vidarbha. They had the game in control as they enforced follow-on but did not bowl to let the opportunity go begging. They need more from their bowlers here.

Kedar Jadhav will feature for Maharashtra.

Here’s how the two sides may lineup for Baroda vs Maharashtra Ranji Trophy match.

Join our Telegram Channel to get updates on your mobile IndiaFantasy ”

“Have you followed us on Twitter yet? It’s a great place Click here to check it out.

Aditya Waghmode, Deepak Hooda and Yusuf Pathan were among the runs for Baroda, while Chirag Khurana and Rahul Tripathi were the two contributors with the bat for Maharashtra in the first game of the Ranji season.

Satyajeet Bachhav, Lukman Meriwala and Atit Sheth are the best three bets with the ball. 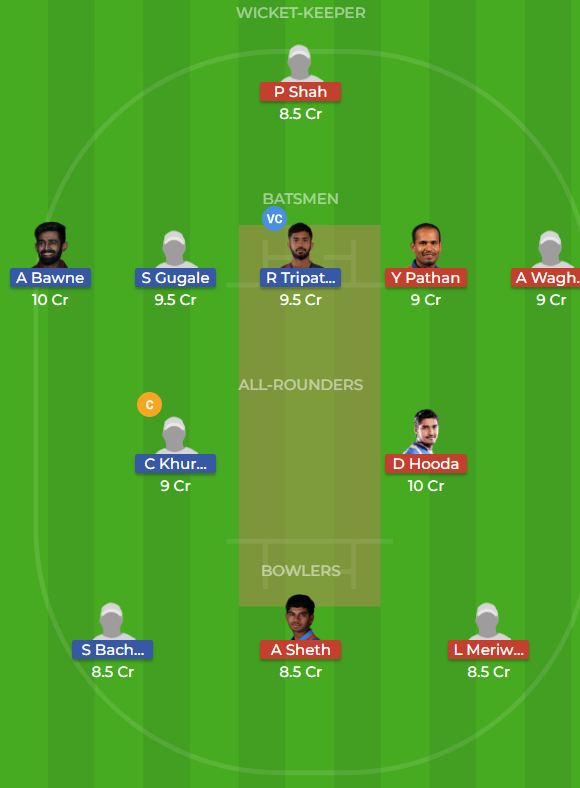