AUS W vs SWE W Dream11:  Australia Women will be up against Sweden Women in the upcoming semi final clash in the Tokyo Olympics 2020. Sweden are on the back of a resounding 3-1  win over the hosts Japan in  the quarter finals, and will take plenty of confidence from it. Apart from that, they also beat the World Champions USA in their first game, and have displayed great character so far.

Australian Women have also impressed in the mega event so far, and did manage to scrape past an enthralling 4-3 victory over Great Britain. However, they will have to be organized in defence in order to prevent the in-form Swedish attack from hurting them. Nonetheless, the viewers can expect this to intriguing affair.

Where to watch Sweden Women vs Australia Women Live: The match will be broadcasted on the Sony Sports Network.

From the previous four meetings between the two sides, it’s the Swedish Women who have asserted their dominance through two wins. Two games have ended on level terms as well.

Expected Changes and Strategy: L Williams should be starting in at goal, while, S Catley, C Polkinghorne and E Carpenter could feature in defence. T Yallop, E Van Egmond and Hayley Raso are expected to start in midfield. K Simon, S Kerr and C Foord could lead the attack up top.

Expected Changes and Strategy:  H Lindahl should be starting in at goal, while, J Andersson, M Eriksson, A Ilestedt and H Glas should feature in defence. Kosovare Asllani, Caroline Seger and Filippa Angeldal could start in the midfield region. S Blackstenius, F Rolfo, and S Jakobssib are in contention to lead the attack. 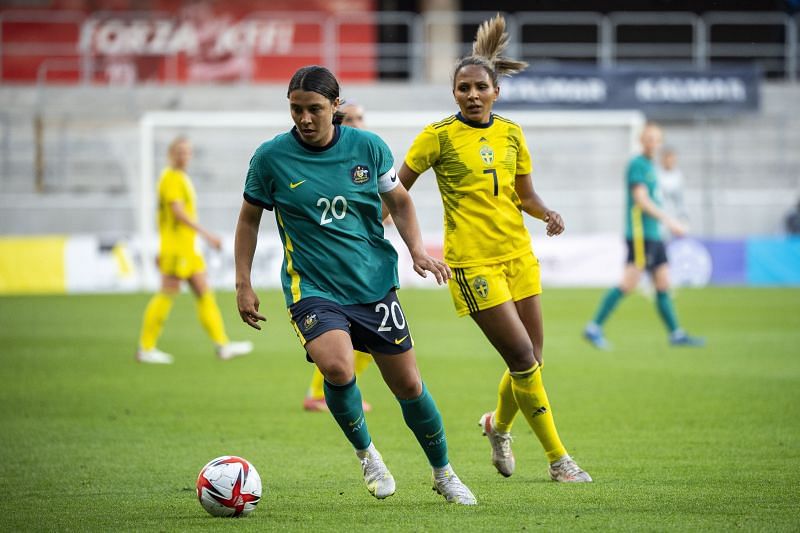 S Kerr can prove to be lethal from the Australian camp. Kerr has registered five goals from the four appearances in the Tokyo Olympics. She can be added to the SWE vs AUS Dream11 Fantasy Football team as well.

L Hurtig can pack a punch for Sweden in the advanced region. Hurtig has two goals from the last four appearances.

T Yallop, and M Fowler also have  goal each from the four appearances for Australia the Olympics.

F Rolfo has impressed in the final third region for Sweden. Rolfo has two goals and two assists under her belt from the three appearances. She can be included to the AUS-W vs SWE-W Dream11 Team.

Sweden have scored 12 goals from the four games so far, and have been one of the teams to beat. They are touted to go for gold, and Australia have a major task ahead of them. Putting things into consideration, it’s Sweden that will be heading in as the favorites to win as per the AUS-W vs SWE-W Today Match Prediction odds.