LAG vs RSLC Dream11: LA Galaxy host Real Salt Lake at the Dignity Health Sports Park tomorrow. The home side will have wind in their sails following a hammering of Portland Timbers 4-1 in the previous game. The Los Angeles side find themselves 5th in the league standings with 28 points from 16 games.

Meanwhile, Portland Timbers are mid-table in 15th place with 21 points from 15 games. Their recent form is mixed with two wins and two losses in the last four games. They are heading into this game following a goalless draw against Houston Dynamo. The two sides met just two weeks back in an entertaining game that ended 2-2.

LA Galaxy has won three of the last five with a 2-1 margin while Real Salt Lake has won once. Their last encounter was a 2-2 draw. 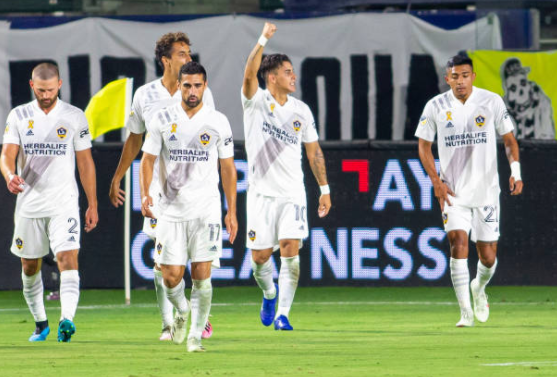 Injury Report and Unavailability: The hosts are headed into this game without striker Javier Hernandez. There are no other injuries or suspensions.

Expected Changes and Strategy: Greg Vanney’s side will line up in the usual 4-2-3-1 formation. J Bond should be starting between the posts. J Villafana, D Williams, N DePuy, and J Araujo are likely to be the back four. S Kljestan and R Raveloson should partner in the double pivot in midfield. V Vazquez, K Cabral, and S Grandsir should start in the attacking midfield positions and supply balls to E Zubak upfront. Injury Report and Unavailability: Toni Datkovic, Andrew Brody, and Zack Farnsworth are out of the game due to injuries. Justen Glad is suspended as he got a red card in the last game.

Expected Changes and Strategy: Freddy Juarez will also roll out a 4-2-3-1. D Ochoa should start between the posts. D Toia, M Silva, E Holt, and Aaron Herrera should form the backline. N Besler and D Kreilach should partner up in central midfield. A Rusnak, J Meram, A Julio might play in attacking midfield roles and provide service to B Wood up top.

Rayan Raveloson has scored four goals in the last five games. Make hay while the sun shines and hand him the armband. He also gets a lot of points from his all-action display from the center of the park and returned a match-winning performance last time out.

Damir Kreilach could be pivotal if the visitors were to get anything from this game. He has five goals and an assist in the last ten games. He is very good in the air and always involved in set pieces.

Aaron Herrera could pay rich dividends for the risk-takers. He can deliver on both ends of the pitch. He has a goal and five assists this season from the right-back position.