LEI vs TOT Dream11 MATCH PREVIEW:
Leicester City will be aiming to extend their unbeaten streak to seven games in the Premier League when they host Tottenham Hotspur in a crunch match at King Power Stadium, in Leicester, tomorrow on Saturday night (IST).

Leicester City:
Leicester City are enjoying another strong campaign this season. The whole team deserves a huge praise for keeping the focus on the ground despite enduring a tough period away from the real action.

Leicester’s last defeat came against Arsenal at the Emirates Stadium on October 23, and since then the 2015-16 Champions have accumulated ten points from the last six matches. It’s quite a good return considering the circumstances surrounding the King Power Stadium.

But the real test for Claude Puel and his men starts now as the home clash against Spurs kick-starts a tough streak which will see the Foxes facing Manchester City twice in a week, with a trip to London to face Chelsea at Stamford Bridge sandwiched between those two herculean games.

Tottenham Hotspur:
Tottenham Hotspur buried the ghosts of North London Derby in the best way possible as they returned to winning ways against Southampton, thumping them 3-1 at the Wembley Stadium.

It was a huge result considering Chelsea lost while both Arsenal and Manchester United dropped points in a 2-2 draw at Old Trafford. As a result, the three points took Spurs back to 3rd in the league, and two points better than the other top-4 rivals from London.

Spurs are very much in command of their own destiny, whether it’s the top-4 finish in the league or the qualification to the Champions League knocout rounds is concerned. A win at Camp Nou against Barcelona be enough to secure a 2nd place finish in the group ahead of Inter milan.

Leicester City:
Injured – Leicester City have no fresh injury concerns ahead of the match.
Suspended – None.
Questionable – The Foxes will be assessing the fitness of Harry Maguire, while super striker Jamie Vardy remains questionable.

Note: Claude Puel rested several first trip players for the trip to Fulham, and is expected to name his strongest possible XI for the home clash against Spurs.
Key Players – Maddison, Iheanacho

Note: Jan Vertonghen will be available for selection after serving the suspension against Saints in the last match.
Dele Alli will also be in contention for a start, while Foyth is likely to keep his place in the heart of the defence considering he will be unavailable for Barca clash.
Key Players – Kane, Eriksen, Dele

Team 1:
Last season, Leicester outplayed Tottenham but back then they had Riyad Mahrez, while Vardy was fit to terrorise the visitors. The former is gone, while the latter is a huge doubt so we have gone with Iheanacho.
Eriksen, Dier Winks – expect them to dominate in the mid, while Maddison is Foxes’ most gifted player this season. 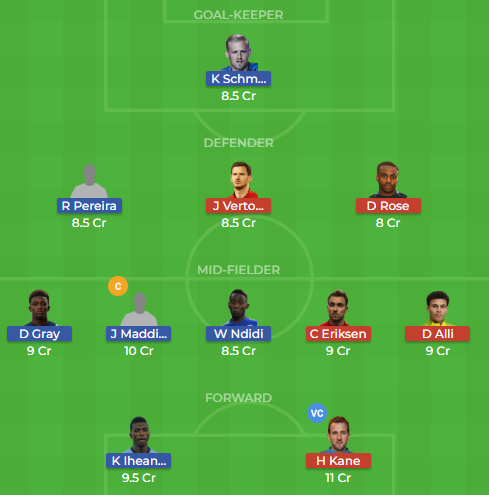 Team 2:
Not many changes.
Strike partnership remains the same. Ndidi comes in as an extra man in the mid from Leicester’s team.
The back has two full-backs.

INDIA FANTASY PREDICTION:
Considering the form of both the teams, a score draw is our prediction.

THIS LEI vs TOT Dream11 MATCH PREVIEW IS BASED ON OUR RESEARCH AND UNDERSTANDING FROM VARIOUS NEWS SOURCES. YOU CAN SELECT YOUR OWN PLAYING 11 ON THE BASIS OF TEAM NEWS AND ALL THE OTHER INFORMATION REQUIRED FROM THIS WEBSITE. USING OUR TEAMS IN ANY CONTEST WILL INCREASE THE PROBABILITY OF HAVING THE SAME EXACT TEAM WITH OTHER USERS CAN LEAD TO THE WINNINGS SPLIT.