LIV vs BOU Dream11 MATCH PREVIEW:
Bournemouth’s top-10 credentials will face one of the sternest tests as they host title-chaser Liverpool in the Premier League at Dean Court, in Bournemouth, tomorrow on Saturday evening (IST).

Bournemouth:
The Cherries finally got back to winning ways as they beat Huddersfield 2-1 in the last match. It was not a vintage performance by Bournemouth by any means. In fact, the visitors put on a dominant display, controlling the general play in the middle of the park, but left too many spaces in the boxes for the hosts which in the end proved fatal.

However, a win is a win and nobody will be remembering the proceedings in the match but the three points they earned. It’s the sweetest way to snap a losing streak, which was four in the case for Bournemouth.

It was a phase which was always destined to test the character and the quality of Bournemouth squad as they faced Manchester United, Arsenal and Manchester City in the last five matches.

However, the next fixture is not the end as far as facing a high-quality opponent is concerned. Eddie Howe’s men will be locking horns against Chelsea in the Football League Cup quarterfinals, followed by two tough away games against Tottenham and Manchester United during the Boxing Day schedule.

Liverpool:
Eigthteen-time English Champions scripted a come-from-behind win at Turf Moor against Burnley and remained within a touching distance of Manchester City who are leading the table with 41 points from the first 15 games.

On a rainy night in Lancashire, the match presented a completely different assignment for Liverpool. Jurgen Klopp made seven changes to his starting 11 which took on Everton in the Merseyside Derby. And the lack of understanding between the players was clearly visible as the Reds failed to string together decisive passes in the first half which ended in 0-0.

The visitors came out a totally different team in the 2nd half and forced Joe Hart to make some flying saves.

However, it was Burnley who took the lead against the run of the play as Jack Cork tapped in from the close range.

It was a wake-up call for Liverpool as Klopp’s men then took over the game and deservedly levelled the game through James Milner’s shot from the edge of the box.

Jurgen then threw in both Mohamed Salah and Roberto Firmino into the game with the latter scoring from his first touch in the match. While Shaqiri’s goal in the 2nd half injury time killed Burnley’s hopes of getting anything out of the match.

Bournemouth:
Injured – Bournemouth’s twenty-one-year-old midfielder Lewis Cook has been ruled out for up to nine months after he ruptured his anterior cruciate ligament during Tuesday’s 2-1 win over Huddersfield.
Adam Smith will be missing the match as well and is expected to be out until new year.
Suspended – Dan Gosling is carrying a knock and will be assessed ahead of the match.
Questionable –

Note: Bournemouth are enjoying a very productive time in front of the goal of late, scoring in 10 of the last 11 games.
Key Players – Callum Wilson, Ryan Fraser

Liverpool:
Injured – Midfielder Alex Oxlade-Chamberlain remains sidelined with an injury he suffered against Crystal Palace last season. The former Arsenal star is expected to miss the entire season.
Meanwhile, Joe Gomez suffered a horrible tackle from Ben Mee during Burnley’s clash against Liverpool, and now the defender has been ruled out from the next six weeks, meaning he will be missing the festive period.
Suspended – Sadio Mane missed the trip to Lancashire in the midweek with a gaping cut in his thigh. The Senegalese international will be assessed ahead of the match.
Meanwhile, left-back Andy Robertson was an absentee as well as the Scottish captain is reportedly suffering from a dead leg.
Questionable – To be Updated.

Note: Liverpool have managed just two clean sheets in the last 10 away games in all competitions.
Key Players – Shaqiri, Salah 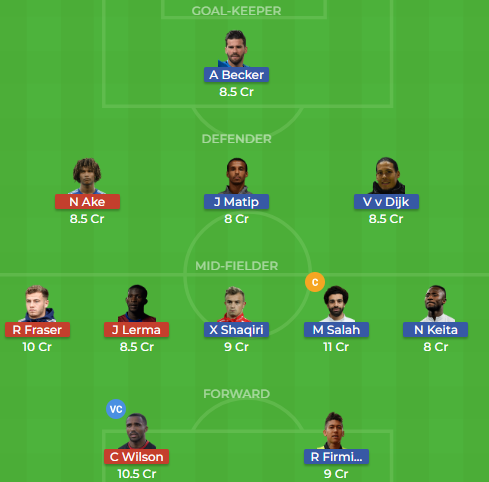 Team 1:
Starting from the back, Van Dijk and Matip are going to partner at the back considering both Lovren and Gomez are out of this match, while Ake is somebody who has unlocked his true potential at Bournemouth since moving away from Chelsea.
Shaqiri and Keita starred in the midweek, while Salah is expected to start after featuring from the bench against Burnley. Ryan Fraser is the assist king in the Premier League this season and his partnership with Wilson can give the visitors some nervy momnets.
No doubt, Wilson will be partnering Firmino at the forward position.

Not many changes, Francis comes in, replacing Matip.
In the midfield, we have Fabinho who could be given a start, while the forward position remains the same.

INDIA FANTASY PREDICTION:
This fixture, Bournemouth vs Liverpool, has produced the fourth highest goal-scoring match in the Premier League. Last season, Liverpool won both the rounds on a 7-0 aggregate scoreline, while the 4-3 win the previous season remain Bournemouth’s only win against the Reds in the top flight football.
However, the Cherries are a different beast this time around and possess Callum Wilson and Ryan Fraser in the ranks who are playing perhaps the football of their lives.
Reds are also facing their injury issues but we expect them to win this game.

THIS LIV vs BOU Dream11 MATCH PREVIEW IS BASED ON OUR RESEARCH AND UNDERSTANDING FROM VARIOUS NEWS SOURCES. YOU CAN SELECT YOUR OWN PLAYING 11 ON THE BASIS OF TEAM NEWS AND ALL THE OTHER INFORMATION REQUIRED FROM THIS WEBSITE. USING OUR TEAMS IN ANY CONTEST WILL INCREASE THE PROBABILITY OF HAVING THE SAME EXACT TEAM WITH OTHER USERS CAN LEAD TO THE WINNINGS SPLIT.