PHX vs GSW Dream11: The NBA Regular Season is hitting the high notes. Teams that were expected to struggle such as the Utah Jazz, Portland Trail Blazers, and San Antonio Spurs have taken flight while there has been a bunch of upsets already. That comes in the early season package but as we move forward, the pendulum will swing either way and some of the overachievers can fall off in a tough week window. Anyway, the two teams here come with heavy expectations as the Phoenix Suns meet the Golden State Warriors.

The Suns won 112:95 against the Clippers as Devin Booker dropped 35 points. The Suns have won two out of three and Devin continues to sizzle to start the season. On the other hand, the Golden State Warriors come to this game after beating the Sacramento Kings 130:125 behind a 33 points outburst by Stephen Curry. The Warriors have also won two out of three games and Steph has banged home 30+ in three straight games.

The Suns’ defense has been on point to start the season. They have once again proven that they are one of the toughest squads on the defensive end and are yet to have a poor defensive game. Their defense is led by the talents of Ayton and Bridges whereas Booker has improved as a defender over the years. Chris Paul is a substantial position defender whereas Cam Johnson has also gotten it done in the absence of Jae Crowder.

Devin Booker has continued to lead the scoring effort and that has been the case for many years. Chris Paul’s scoring has dropped significantly but his passing talent is alone good enough. Deandre Ayton continues to punish defenders inside whereas Mikal Bridges is yet to match last year’s production so far. Cam Johnson does a good job as a floor-spreader whereas Landry Shamet, Cameron Payne, and Damion Lee make up for a strong Guard rotation.

Steph Curry has begun the season on an MVP note and his hunger to win is overwhelming. He of course has been receiving immense support from Andrew Wiggins, who continues to sizzle as a two-way star-level player. Jordan Poole is coming back to the groove whereas Klay Thompson despite reduced impact brings a lot to the table. Draymond Green has been his usual elite defensive self and without him, the defensive effort falls apart.

One of the early troubles has been that their bench has misfired and on the defensive end, they look too lost. The team at times gets overdependent upon Wiggins and Green on defense and there have been some late rotations, causing two teams in a row to cross the 120+ points mark. The team needs to fix this end if they are to repeat because you can’t take the loaded NBA field for granted. Three games in, there have been some issues but the Warriors remain favorites to win it all.

Devin Booker(PHX)
Points: 35
Rebounds: 01
Assists: 04
Steals: 01
Devin made an amazing 13 of his 21 attempts in the last game and he has continued to sprinkle the league with a bunch of points. I believe the elite scorer will be in 28-35 points and 4-6 assists range. Devin can be chosen as a Star/Pro Player in the Dream 11 NBA Fantasy scenario.

Stephen Curry(GSW)
Points: 33
Rebounds: 05
Assists: 02
Steals: 01
Legendary shooter Curry nailed seven triples in the last game and defenses have had no answer for his offensive prowess thus far. I believe he will be in 28-36 points, 4-7 assists, and 3-6 rebounds range.


Deandre Ayton(PHX)
Points: 13
Rebounds: 08
Assists: 01
Blocks: 01
Center Ayton has been one of the best back-to-basket Centers and his play keeps on impressing especially on the rebounding, defensive, and inside scoring end. I believe he will be in 16-22 points, 9-14 rebounds, and 1-3 blocks range.


Andrew Wiggins(GSW)
Points: 24
Rebounds: 05
Assists: 01
Steals: 03
Blocks: 02
Andrew has straightaway made statements as a two-way stalwart and his influence on both ends is going to be detrimental for the Warriors. I believe he will be in 17-24 points, 5-8 rebounds, and 1-3 blocks/steals range.


Jordan Poole(GSW)
Points: 24
Rebounds: 00
Assists: 04
Steals: 01
After a couple of disappointing performances, Jordan has recovered his usual form and made seven of his 14 shots in the last game. I believe he will be in 16-22 points and 4-6 assists range.

Mikal Bridges(PHX)
Points: 07
Rebounds: 04
Assists: 04
Blocks: 01
Wing Mikal is one of the best defenders in the league but his scoring has been a bit down lately which can pick up. I believe he will be in 11-16 points, 5-8 rebounds, and 1-3 blocks/steals range.

Draymond Green(GSW)
Points: 07
Rebounds: 04
Assists: 04
Green remains an elite defender and his all-around skillset makes him one of the more productive Forwards in the league. I believe he will be in 6-10 points, 5-8 rebounds, and 5-8 assists range here. 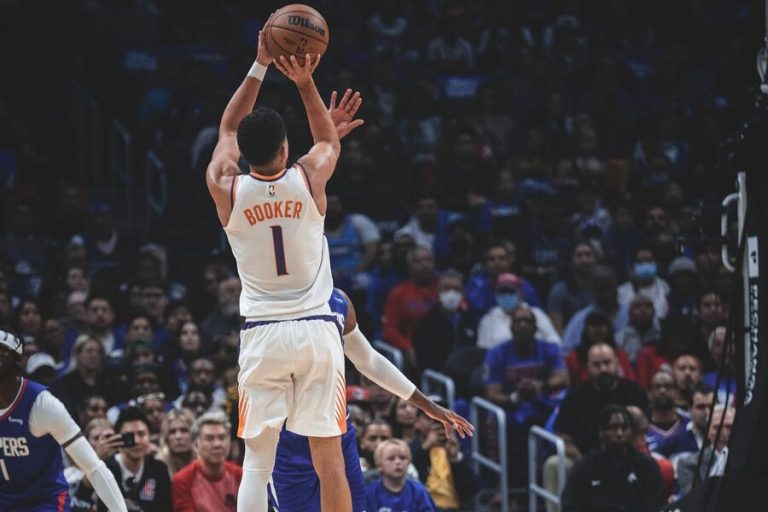