Los Angeles Clippers will be playing host to the defending champions Golden State Warriors at Staples Center on Tuesday morning.

Los Angeles Lakers will be looking to keep the ball rolling when they host Golden Star Warriors. They have splitted their last six games and no doubt this will be the statement result of the lot if the hosts manage to get one over a super team like Golden State Warriors.

Clippers are one of the most offensive teams in NBA this season, as they are averaging a whopping 116.7 points at 47.3 shooting. However, their defensive approach remains a worry as teams are finding it easy against them, scoring at 111.7 points per game. Such a record could be found going even worse when the teams like Warriors come calling.

Clippers should also be confident heading into this match after they became just the 3rd team this season to beat a supremely talented Milwaukee Bucks.

Golden State Warriors lead the Western Conference with a 11-2 record so far this season. It is bettered only by Toronto Raptors in the east who have won 12 and lost just once in the first 13 games.

The Dubs saw their eight games winning streak came to an end against Milwaukee Bucks. What was quite bizarre about that performance that Bucks gave Warriors the taste of their own medicine when Giannis Antetokounmpo led team outscored them in the 3rd quarter, as this is the quarter which Steve Kerr’s men used as a 3rd degree torture against their opponents.

However, that loss was a minor blip in their near-perfect season as they recovered from it with a 116-100 win over Brooklyn Nets in the very next game despite missing Stephen Curry to an injury.

Tobias Harris- The 26-year-old small-guard is a go-to-man in Los Angeles Clippers team. He is averaging 20,7 points per game this season, also racking up 8.9 rebounds per game which is the highest for his team.

Danilo Gallinari – The former New York Knicks forward has averaged 15.4 points throughout his career. But this season, the 30-year-old seasoned player is scoring at 19.4 points per game. Definitely he is a player in good form at the moment and should be in your NBA fantasy team.

Kevin Durant – He is reaching to that point where he could be hailed as one of the best of current generation. The former NBA MVP is a sure shot winner on the scoring charts and with Stephen Curry almost out of this match, expect him to explode in this game.
The former Oklahoma City Thunder is dropping 26.9 points per game this season.

Klay Thompson – The part of the holy trinity of Golden State Warriors, Klay Thompson’s selfless work sometimes goes under the radar. However, he is pivotal to Steve Kerr’s scheme of things.

GSW vs LAC DREAM11 TEAM NEWS:
Los Angeles Clippers:
Injured – No player has been listed as out just yet.

Questionable – Avery Bradley and Luc Mbah a Moute are both carrying knocks and will have to go their a late fitness test.

Golden State Warriors:
Injured – DeMarcus Cousins is recovering from an Achilles Tendon Injury he suffered last season and is still awaiting his first match for Golden State Warriors. The former Pelicans star remains out.
Shaun Livingston is suffering from a foot injury and won’t be travelling to Los Angeles for this match.
Questionable – Stephen Curry was listed as questionable ahead of the last match against Milwaukee Bucks, but played. However, he looked off the pace and remains doubt ahead of this match.
Draymond Green is suffering from a toe injury and will be assessed ahead of this match.
Suspended – None
Updates: Stephen Curry has been ruled out, while Shaun Livingston and Draymond Green could return. 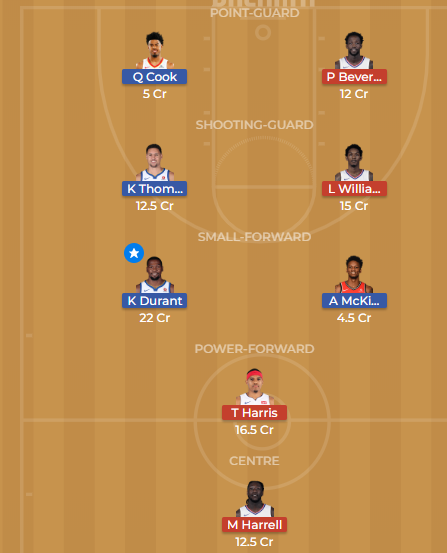 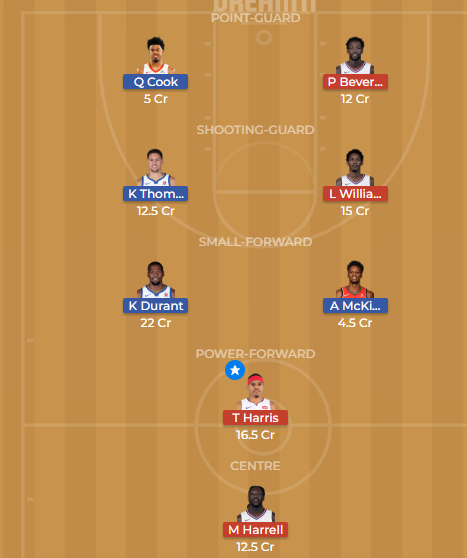 Los Angeles Clippers have lost just one game at Staples Center this season. At home, they are a different team and pretty hard to beat.
But it’s Golden State Warriors they will be facing in this game, arguably one of the best NBA teams of all time and we are backing them to win this match.

NOTE: THIS GSW vs LAC DREAM11 MATCH PREVIEW IS BASED ON OUR RESEARCH AND UNDERSTANDING FROM VARIOUS NEWS SOURCES. YOU CAN SELECT YOUR OWN PLAYING 11 ON THE BASIS OF TEAM NEWS.