OKC vs GSW Dream11: The NBA trade deadline is nearby and the footsteps of big-time moves have arrived. This is one of the most high-profile windows in the league and these are the type of transactions that have been playing huge roles for years in the league. We have seen two big moves as Caris LeVert got transferred to the Cavaliers and Norman Powell to Clippers, a type of move that bolsters the team’s resources for sure. Anyway, let us jump into this game between the Oklahoma City Thunder and the Golden State Warriors.

Thunder has almost twice losses than wins and this has been the terrain for the team throughout the season. Oklahoma City has been in rebuilding mode so these types of returns aren’t wholly surprising. With Shai Gilgeous-Alexader out, they are missing their leading scorer. However, that is fine, Josh Giddey can utilize this opportunity to grow further.

On the other hand, the Warriors have been playing at a high keel. They have been on an eight-game winning streak and they have peaked around the mid-season window. The team has adjusted since the injury to Draymond Green, and with Klay also hitting his peak, the team has done a great job of putting together quality offense.

Thunder: Young but can capitalize in long-term
The Oklahoma City Thunder has been doing a great job of playing defense all season long. They have drafted players that have done an admirable job of drafting hustle-based players. Their rebuild has been painful in terms of offense but that is fine, I think if you display defensive discipline, you can get the long-term production on offense. The Thunder will be heading to the lottery again and I think if they target an athletic big Forward or Center, they can really develop something special. The team has found a coach in Mark Daignault who has put emphasis on hustle and defense.

See, with Shai(Now injured) the team has a high-quality athletic scorer, Luguentz Dort is a two-way wing with great potential. Meanwhile, Josh Giddey has shown a lot of promise as the rookie and he is an all-around presence whose scoring can improve. Jeremiah Robinson-Earl(Also injured) had shown big-time hustle and rebounding potential. Meanwhile, Bazley has been also showing some potential at the big-Forward spot. Tre Mann can develop into a special scorer if he capitalizes upon shot selection. Overall, the Thunder’s next draft pick will be a crucial one and if they find an athletic big like Mobley, they can build upon their gains.

Warriors: Watch out!
The scary part about Klay Thompson’s return is that the team depth has been bolstered further. With Green out, the team’s defensive big Forward, the team lost a lot of semblance on defense. Draymond is also a prime mover at the offensive end and his vocal leadership enables the Warriors to be an effective two-way team. However, this is where the offseason signings and the developed young core have helped out the team. The Warriors have discovered an effective main five and starting unit, they have a cover for injury at the guard position and because their core has played together for many years, they know where to find who.

With Stephen Curry, Klay Thompson, and Jordan Poole, the team has a high-scoring backcourt and also the one that can fight on the defensive end. Andrew Wiggins has developed into a high-quality two-way wing and his growth will carry the Warriors further. Kevon Looney has been a big rebounding presence and also plays effective defense. Otto Porter Jr. and Andre Iguodala are two athletic wings who have contributed big-time. Meanwhile, with a bench of Damion Lee, Jonathan Kuminga, Nemanja Bjelica, and Juan Toscano-Anderson, the team is well-versed in most areas, with their bases covered.

Stephen Curry(GSW)
Points: 20
Rebounds: 01
Assists: 07
Steals: 02
Steph has been having another great season and he should not be seen as a long-range shooter only, he has a lot to offer just by his mere presence. Curry has been scoring 20+ points, dishing 6+ assists on a regular basis these days.. Curry can be chosen as a Star/Pro Player in the Dream 11 NBA Fantasy scenario.
Expected Fantasy Points Range: 39-50

Josh Giddey(OKC)
Points: 24
Rebounds: 04
Assists: 08
Giddey has been blossoming into a great player whose all-around talent is highly enticing. Josh has been scoring around 14 points, grabbing 4 or more rebounds, and dishing 4 or more assists a game regularly.
Expected Fantasy Points Range: 30-41


Darius Bazley(OKC)
Points: 18
Rebounds: 07
Assists: 01
Steals: 03
Bazley has been a strong big Forward recently and the springy Forward makes a lot of difference. The Forward has scored in the 13-18 points range while clasping 5 or more rebounds on a regular basis.
Expected Fantasy Points Range: 27-36


Klay Thompson(GSW)
Points: 23
Rebounds: 05
Assists: 07
Klay has found his groove this season and his ability to shoot from beyond the arc makes him an incredible fit alongside Steph. He has scored in the 16-24 points range recently.
Expected Fantasy Points Range: 21-33 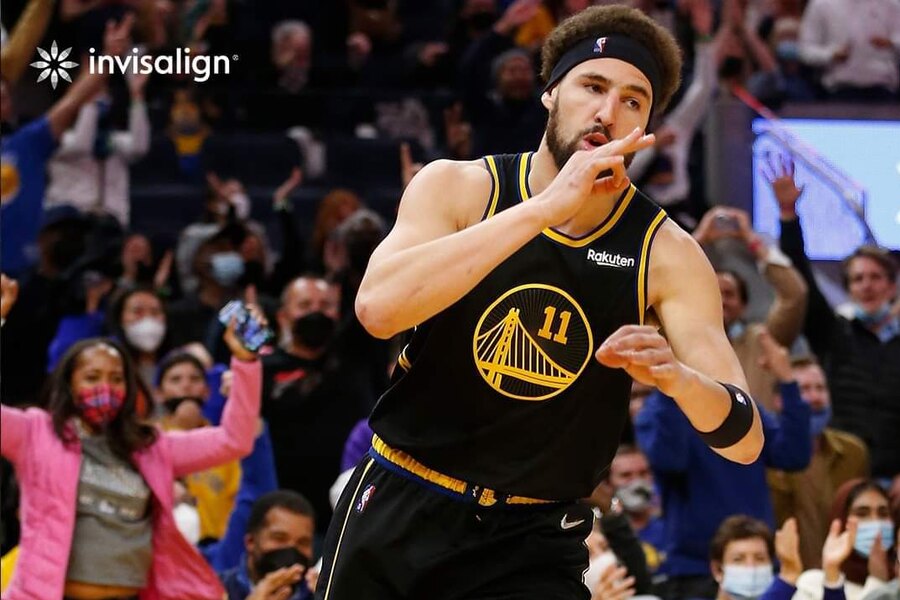 Tre Mann(OKC)
Points: 16
Rebounds: 03
Assists: 03
Mann has raised his scoring level but yes, he has had his shooting troubles. Mann has scored 13 or more in three of the last four games but his three-point shooting has been a bit down.
Expected Fantasy Points Range: 18-27

Andrew Wiggins(GSW)
Points: 12
Rebounds: 01
Assists: 04
Andrew has continued to be one of the more effective two-way wings in this league. The SF has been scoring 17+ points and has grabbed around 4 rebounds a game.
Expected Fantasy Points Range: 25-34 The particular contest is not going to be displayed on streaming platforms Voot and JIOTV, the two official NBA streaming services in India. On the other, the TV outlets MTV and VH1 are also not going to showcase this game. So the best way to plug your action in the action is by buying an annual subscription to the NBA League Pass. The Annual subscription provides you access to all the live games, and in case you miss the live stream, you can get a full game replay afterward. To know the news, score, stats, visit the official website of the NBA.