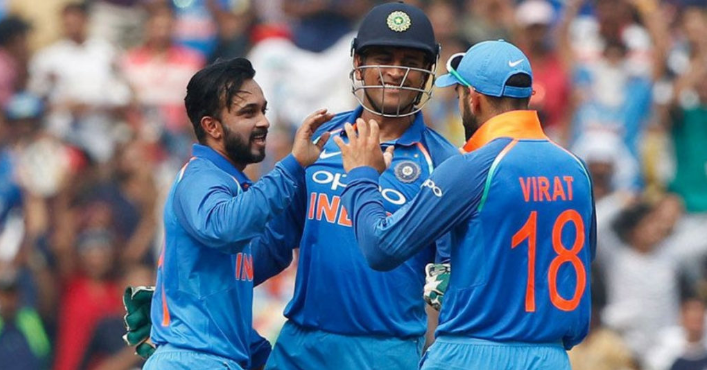 Kedar Jadhav has emerged as the X-factor in team India. His unorthodox spin bowling is not only giving the team a solid option in the middle overs but his ability to pick wickets on regular basis has made him a man with the golden arm.

But the Indian cricketer’s rise as a trusted bowler for the captain has been phenomenal considering the fact that Jadhav rarely bowled in domestic cricket and in fact has only one wicket in first-class cricket. So how did the aggressive middle-order batsman suddenly realize his bowling potential?

The Indian cricketer himself revealed the curtains on this issue while interacting with the media. Jadhav said that it all began in Dharamshala in October 2016 when Team India was training ahead of the ODI against New Zealand.

The team was almost done with the practice session but as the lunch was delayed for some reasons, Indian players were forced to stay in the nets and work in batches. The frontline spinners Axar Patel and Amit Mishra were a part of the other group and hence Jadhav was asked to roll his arm.

Reluctantly, Jadhav bowled for a while and MS Dhoni who observed him closely was more than impressed with Jadhav’s abilities. In that series, Jadhav was made to bowl whenever the team needed to break a partnership and the bowler responded effectively by claiming wickets. And soon the spinner became an integral part of India’s middle over plans.

Also read: Fitness has made me a different cricketer

Dhoni, the master of path-breaking decisions

This is not the first time Dhoni has made an out-of-the-box move which has worked for the team. In 2013, Dhoni resurrected Rohit Sharma’s career by asking him to open the innings. Since then Rohit has become the most prolific opener in international cricket and the same can been said about Ambati Rayadu who had his best IPL season in 2018 when he played under Dhoni’s leadership.

Speaking about his bowling, the Indian cricketer added that since the time Dhoni asked him to bowl in the New Zealand series, his life has completely changed and he feels confident about it.

Smitten by cricket, green mountains, and written words, Chaitanya is engrossed with cricket stats and analysis. But cricket commentary is what he savors the most.
Previous ArticleThree memorable India vs Bangladesh matches in Asia Cup
Next ArticleWatch Amitabh Bachchan tease Anushka over exchanging flying kisses with Kohli