IND vs AUS: Why Toss has been Delayed for India vs Australia 2nd T20I? When will the Match Start? 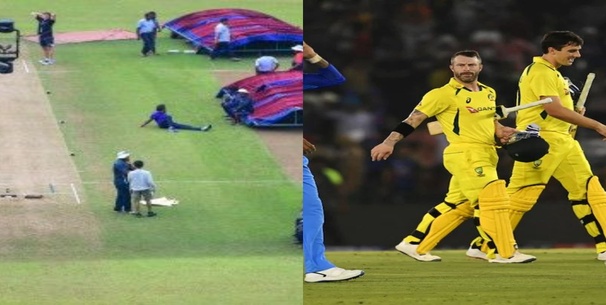 IND vs AUS Toss Delayed: In a big breaking news development, toss has been delayed due to wet outfield at the Vidarbha Cricket Association Stadium in Nagpur for the India vs Australia 2nd T20I encounter. The visiting Australian started off their tour with an amazing performance as they registered a brilliant 4-wicket win against India in the first T20I while chasing a massive 200+ total. The Aaron Finch-led team have a lead of 1-0 in the three-match T20I series while the hosts will be looking forward for a strong comeback.

IND vs AUS: Why Toss has been Delayed for India vs Australia 2nd T20I? When will the Match Start?

After heavy rains witnessed in the last few days, there are some wet patches in the outfield which has delayed the toss for IND vs AUS 2nd T20I match at the Vidarbha Cricket Association Stadium in Nagpur. The Board of Control for Cricket in India (BCCI) have posted on Twitter that the umpires will have an inspection at 7 PM IST. It looks like the umpires and the teams are not convinced with the playing conditions on the ground at this moment, thus, there will be another inspection at 8 PM IST. The recent update is that the officials will have their third inspection of the pitch at 8:45 PM IST. It is to be noted that the cut-off time for a five-over-per-side contest is 9:46 PM IST.

The big update is that the umpires have officially announced that the India vs Australia 2nd T20I will be an 8-over-per-side match which will be starting at 9:30 PM IST.

Listen in to what the umpires have to say about the possibility of play today.#INDvAUS pic.twitter.com/wznhbQfmID

A cricket maniac who lives his life like a T20 match, time is short so make the most of it. Always thriving to learn more about cricket writing and obviously being an Indian, a big cricket expert.
Previous ArticleIPL 2023 Auction Date Announced? Here’s the update
Next ArticleIndia vs Australia Start Time Announced. Check official update