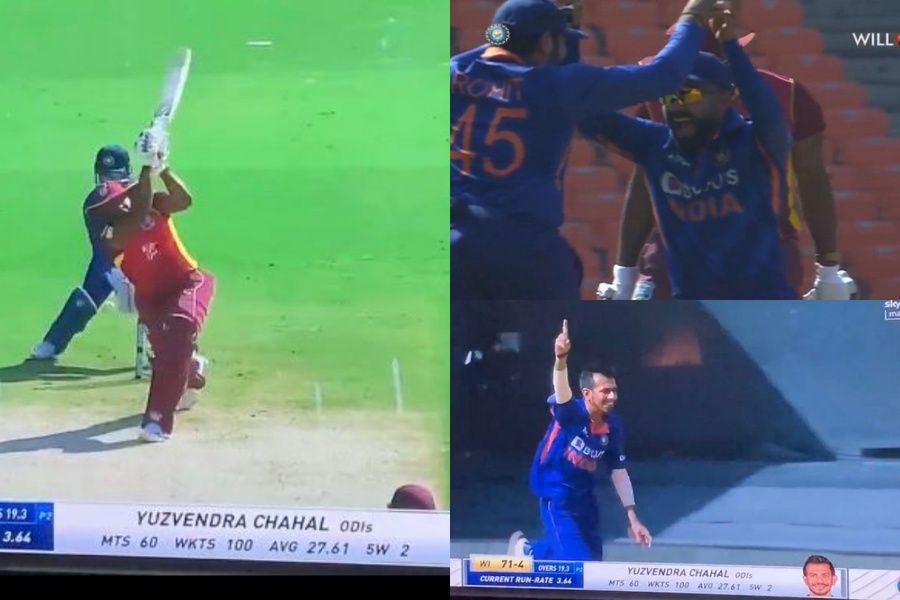 India vs West Indies Live: Team India is currently playing their historic 1000th ODI match against West Indies at the Narendra Modi Stadium in Ahmedabad. West Indies will be playing as many as three ODI and a total of 3 T20I matches against India during this white-ball tour. In the ongoing first ODI match, India captain Rohit Sharma has won the toss and opted to bowl first.

First ball on a turner, you’re the big wicket, your team is two wickets behind the game, their best spinner is bowling to you, first ball.

With Pollard's wicket, half of Windies side is back in the pavilion.
Also Chahal becomes 5th fastest Indian to claim 100 ODI wickets.#WI 73/5 in 21 ov#INDvWI #WIvIND pic.twitter.com/hqJQg1LGQ0

After picking up two big wickets off consecutive deliveries, Chahal also dismissed Shamarh Brooks in the next over to take his third scalp of the match. The 31-year-old spinner has completed his 100 wickets from 60 ODI matches and he is the fifth fastest bowler for India to reach the landmark only behind the likes of Irfan Pathan, Kuldeep Yadav, Jasprit Bumrah and Mohammed Shami.

After losing the toss and being asked to bat first, West Indies have not had the best of starts in this India tour losing a total of three wickets for just 45 runs on the scoreboard. On his return to international cricket, off-spinner Washington Sundar bowled really well upfront picking two key wickets while Mohammed Siraj also started off nicely in his opening spell taking the wicket of Shai Hope.

Related: Why is KL Rahul Not Playing Today?

However, Yuzvendra Chahal picking up three amazing wickets has increased the troubles for the visiting West Indies team as they are struggling at 79 for 7.

A cricket maniac who lives his life like a T20 match, time is short so make the most of it. Always thriving to learn more about cricket writing and obviously being an Indian, a big cricket expert.
Previous ArticleIND vs WI: Why are India Players Wearing Black Armbands in first ODI against West Indies? Check Details
Next ArticleBengal Womens T20 Squads, Schedule, Playing 11, Dream11 Prediction, Live Score and Streaming