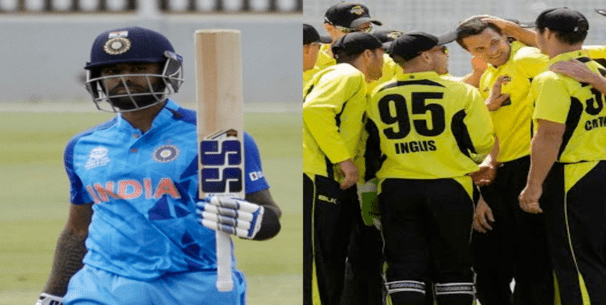 The Rohit Sharma-le Indian men are currently in Australia for the upcoming men’s T20 World Cup. The tournament is set to kick off on October 16 with a clash between Namibia and Sri Lanka in the morning, followed by another game between the Netherlands and UAE, in the afternoon.
India, particularly, will commence their campaign on October 23 (Sunday), against their traditional rivals Pakistan. The game will be played at the Melbourn Cricket Ground at 1:30 PM.

Deeming the Australian conditions and the importance of the biggest event of the year, the Indian team, today (Monday, October 10) played a practice game against Western Australia XI. The game was played at the WACA Stadium in Perth and started at 11 AM IST.

Virat Kohli and KL Rahul were rested for the game. Batting first, Sharma opened the Indian innings with Rishabh Pant. In-form batter Suryakumar Yadav hit 52 runs in 35 deliveries with three fours and three sixes. Hardik Pandya assisted his former Mumbai Indians teammate in the middle and scored 29 runs in 20 deliveries. The ‘Men in Blue,’ in the end, put on a decent total of 158 runs for six wickets.

Given the target of 159 runs in 120 deliveries, Western Australia XI lost four wickets with only 12 runs on the board. Sam Fanning, the Western Australia batter, scored a fifty. For India, Bhuvneshwar Kumar picked up two wickets, while Arshdeep Singh picked up three. Leggie Yuzvendra Chahal too picked a couple of wickets. The hosts couldn’t get off the mark as the Indian bowlers restricted them to a score of 146. India won the game by 13 runs.

Furthermore, India is scheduled to play one more practice game against Western Australia.
Besides, before heading to the World Cup, India are supposed to play warm-up games versus the hosts, Australia and New Zealand. Sharma and co. will face the Aussies on October 17, while their New Zealand clash will be played on October 19. Both games will be played in Brisbane.