IND vs NED Today Match Prediction for T20 World Cup 2022 – Who Will Win India vs Netherlands? 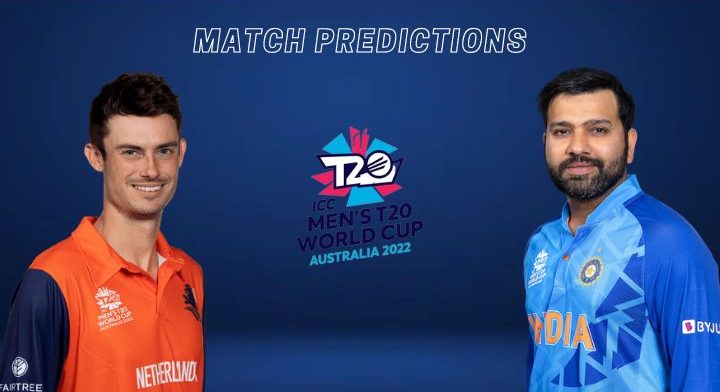 IND vs NED Today Match Prediction: King Kohli transformed himself into an Emperor last Sunday, as India registered a miraculous win against their arch-rivals Pakistan in a fully packed MCG. As the excitement and thrills of that match still run hot in every Indian’s mind, the Indian cricket team will gear up for their second venture in this T20 World Cup. They will face the minnows Netherlands at the SCG on Thursday to continue their dominance in Group 2.

The Netherlands on paper is no match for this star-studded Indian team. But they had a decent tournament so far, defeating both UAE and Namibia in the qualifiers. In Super 12, they lost to Bangladesh in the first match and will be keen to regroup and move forward. Can the dutch stand up to this Indian side? Let’s find out.

The surface in SCG is a batting pitch. Considering the previous results, teams are most likely to bat first at this venue after winning the toss.172 is the average score at this venue with the average first innings score rising up to 182.

If he can dispatch Haris Rauf bowling at 150kph to the stand of the MCG, just imagine the amount of damage he can inflict upon the inexperienced Dutch bowlers. As demonstrated a few days against Pakistan, King is well and truly back and, he is the Indian batter to put your money on for this T20 World Cup. He loves batting in Australia and would feast on these batting-friendly tracks in SCG.

In the absence of Jasprit Bumrah, the young Arshdeep Singh is India’s go-to bowler in powerplay and death overs. Ever since making his debut, he has been taking wickets for fun and is very effective in controlling the run-flow as well.