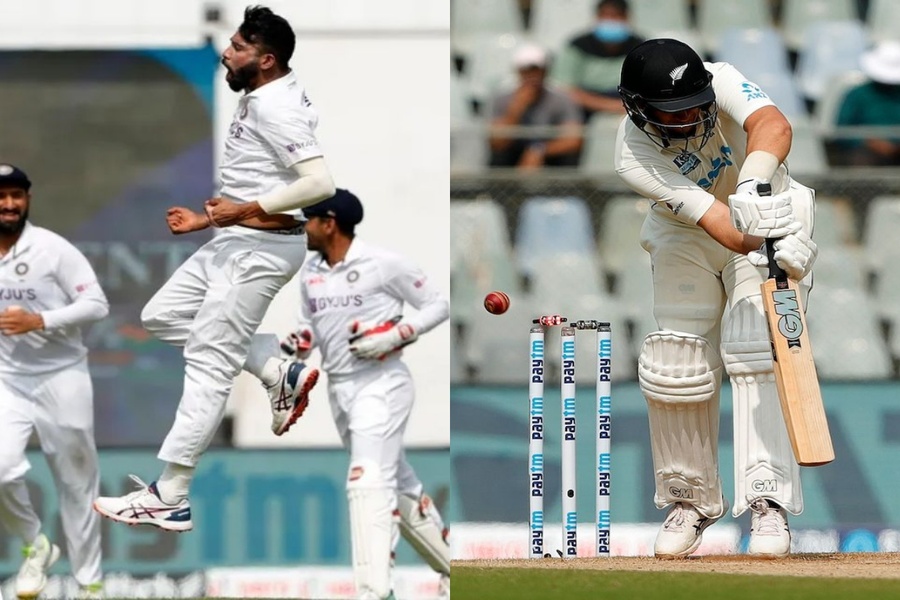 2nd Test IND vs NZ Live: Team India is currently locking horns with New Zealand in the second and final Test match of the two-match series at the Wankhede Stadium in Mumbai. After winning the toss and batting first, India managed to put up an impressive total of 325 runs as opening batter Mayank Agarwal contributed with a sensational knock of 150 runs. For New Zealand, left-arm spinner Ajaz Patel achieved an incredible feat as he picked up all the ten Indian wickets in the first innings.

Watch: Mohammed Siraj PEACH of a delivery to get Ross Taylor

The Indian team has got off to a remarkable start with the ball in the first innings of the second Test match in Mumbai courtesy some wonderful pace bowling. India’s new ball bowler Mohammed Siraj has rattled the New Zealand top-order in quick session having first dismissed both the openers, Will Young and Tom Latham in quick succession. Siraj then bowled a peach of a delivery to dismiss Kiwi experienced batter Ross Taylor which was his third wicket in the Test match.

Related: Virat Kohli ANGRY Reaction after being given OUT – WATCH

The visiting New Zealand team find themselves in a really troublesome situation after having lost five key wickets with just 31 runs on the scoreboard.

Related: List of Bowlers who have taken 10 wickets in an Innings

The first innings of the second India vs New Zealand Test match portrayed to be an exciting battle between Mayank Agarwal and Ajaz Patel as both these players were at the top of their game so far. After a brilliant opening stand of 80 runs, Ajaz came back strongly to pick up three quick wickets including the prized scalp of Indian captain Virat Kohli. For India, Mayank then scored an amazing century and also composed crucial half-century partnerships with Shreyas Iyer, Wriddhiman Saha and Axar Patel.

Related: Why is Kane Williamson Not Playing Today?

Mayank got out after scoring a wonderful knock of 150 runs while Axar also notched up his maiden Test half-century, however, Ajaz Patel completely stamped his authority at the Wankhede Stadium by becoming the only third cricketer to take all the ten wickets in a single innings of a Test match after Jim Laker and Anil Kumble.

A cricket maniac who lives his life like a T20 match, time is short so make the most of it. Always thriving to learn more about cricket writing and obviously being an Indian, a big cricket expert.
Previous ArticlePSL 2022 Schedule: Complete list of Pakistan Super League matches for upcoming edition
Next ArticleSIX vs STA: Possible Sydney Sixers Playing 11 for Match 1 of Big Bash League