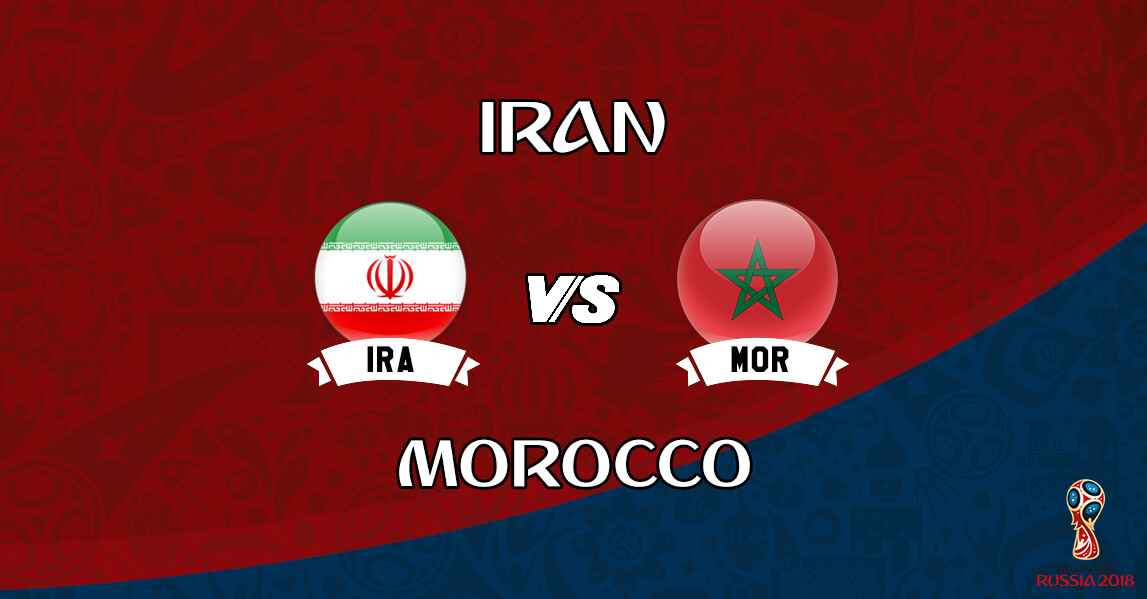 The second match of Match Day 2 will feature two Group B teams, Morocco and Iran taking on each other in the Saint Petersburg Stadium. This is by all means a crucial game because both Morocco and Iran are not that popular as names when it comes to football. Adding more fuel to their fear is that they are in group with Portugal and Spain. Every football fan would choose Portugal and Spain to make it to next round than these two teams so there would be plenty of pressure on these two underdogs team because to qualify to the next round, they would have to win this game at any cost and if they can even manage to draw the other two games they would be in a safe position but time would tell which team will go through and which team will not.

Morocco is back in the World Cup after a gap of 20 years and now that they are here they would want to do the most of it from this tournament. However, Morocco will start their opening game as the favourites because technically they have the better players and the better team in this fixture or as it looks like theoretically. Morocco will be led on the ground by the veteran Medhi Benatia. But all eyes would be on the 24 year old striker, Ayoub El Kaabi, who has scored an impressive 11 goals in just 10 international caps. If the striker can keep his form, Morocco has a long way to go in this World Cup. They are in great form and haven’t lost a match in over a year and have won 14 of their last 18 games.

On the other hand we have an Iranian side that is behind their rivals for this game on form and talent if compared to the current Moroccan side. Though Iran won their last game against Lithuania but they have been terrible on field and would come into this game as the underdogs. Their charades of failure don’t boast much hope for them in this World Cup and are expected to be the last team on the points table in their group after the group matches are over.

This FIFA World Cup 2018, Group B, match is to be played at St. Petersburg Stadium, St. Petersburg at 18:00 hours in Local time. A thrilling game awaits everyone on Match Day 2 for everyone and can be watched live on Sony LIV.

Iran: Masoud Shojaei will captain the Iranian side in this game. Karim Ansarifard, Heerenveen’s Reza Ghoochannejhad and Sardar Azmoun fight for a spot in the front for this game. Ehsan Hajsafi is expected to start on the left flank but that’s doubtful. Midfielder Saeid Ezatolahi is suspended and is not likely to feature in this game. Mehdi Taremi and Akshan Dejagah are injury concerns for the Iranian side. Mehdi Torabi is back and is available for selection in this game.

Morocco: Ayoub El Kaabi is expected to lead the Moroccan attack for this game with the likes of Hakim Ziyech, Karim El Ahmadi and Amine Hart will start in the midfield. Juventus centre back Medhi Benatia will captain the side. Boutaib is expected to start in the front if El Kaabi is to be replaced. Nabil Dirar’s fitness is a big concern for Morocco which would lead Nordin Amrabat starting at right back in this game.

It’s a must-win game for both the teams considering both these teams are placed in a group containing European powerhouses Portugal and Spain.

04:58 PM,
Morocco are still fretting over the fitness of right-back Nabil Dirar who missed his country’s friendlies against Slovakia and Estonia because of a calf injury.
Iran, defensive midfielder Saeid Ezatolahi misses out on this match due to the suspension. While striker Mehdi Taremi and former Fulham and Nottingham Forest midfielder Askhan Dejagah remain doubtful ahead of this match.
Winning formula – We are backing Morocco to win this game and that’s choosing more Morocco players in your team could come in handy.
Meanwhile, watch how Morocco fans are having a blast in Russia

Perhaps the one truly must win match for both sides involved from the first round of fixtures, Morocco and Iran can’t afford to play for a draw as matches with Spain and Portugal lay in wait. This will likely be a nervy match at first as a result, and with both teams’ success built upon strong organisation the entertainment may not really kick in until the second half. It’s Morocco that have the greater quality throughout their squad, however, and if the Atlas Lions can find the first goal they will be confident of seeing the game out and giving themselves a great platform to progress.

NOTE: THIS IRA vs MOR Dream11 MATCH PREVIEW IS BASED ON OUR RESEARCH AND UNDERSTANDING FROM VARIOUS NEWS SOURCES. YOU CAN SELECT YOUR OWN PLAYING 11 ON THE BASIS OF TEAM NEWS.

THIS IRA VS MOR MATCH PREVIEW IS BASED ON OUR RESEARCH AND UNDERSTANDING FROM VARIOUS NEWS SOURCES. YOU CAN SELECT YOUR OWN PLAYING 11 ON THE BASIS OF TEAM NEWS AND ALL THE OTHER INFORMATION REQUIRED FROM THIS WEBSITE. USING OUR TEAMS IN ANY CONTEST WILL INCREASE THE PROBABILITY OF HAVING THE SAME EXACT TEAM WITH OTHER USERS CAN LEAD TO THE WINNINGS SPLIT.