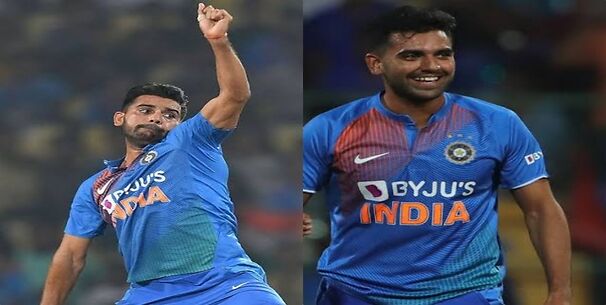 India have faced another setback as one of their reserve bowlers is ruled out of the world cup squad. Indian main squad have already landed in Australia and even played a warmup game against Western Australia which they won. The reserve players are set to fly in another day or two.

Deepak Chahar is one of the best exponents of new ball in T20 cricket. He can extract movement with the new ball even when there is very little help in the wicket. He comes as a package as well as he can be a really good hitter down the order. Although, his bowling in other phases is horrible, he has proved that he can be a smart operator even with all his limitations.

Deepak Chahar played the T20I series against South Africa, he was also set to play the ODI series against them but he was injured and didn’t play any ODIs against them. It was expected that he would recover in time and fly to Australia just before the warmup games but the latest news is that, he has been ruled out of the world cup. He was one of the reserves for the world cup.

Deepak Chahar is already into his 30s. He missed the IPL last year due to injury. He has a skillset that is valued highly across world cricket. He is a lethal new ball bowler and the powerplay wickets are extremely valuable. Deepak Chahar wouldn’t be fond of the year 2022, he will be hoping to start afresh after recovering from this injury.

Taking the life out of me is better than taking cricket from me. Welcome to my world which gives nothing but happening stories in the cricketing world
Previous ArticleWho is the Run Machine of Cricket?
Next ArticleMohammed Shami, Mohammed Siraj & Shardul Thakur to be included in India Squad for T20 World Cup 2022? Here’s the update