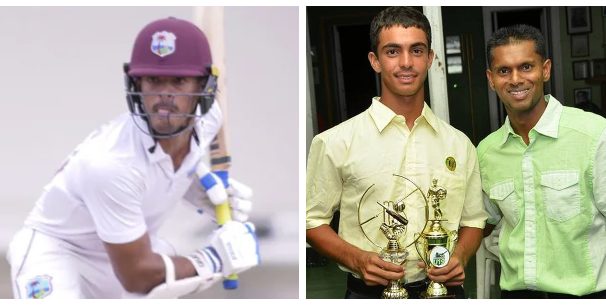 Tagenarine Chanderpaul is an exciting West Indies opening batsman who began playing regional cricket in 2013 and international cricket in 2022. He made his Test debut on November 30, 2022, in Perth against Australia.

Who is Tagenarine Chanderpaul’s Father?

Tagenarine is the son of former West Indies cricketer Shivnarine Chanderpaul. Chanderpaul, who is regarded as one of the best batsmen of all time, is the first Indo-Caribbean to play 100 Tests for the West Indies. Chanderpaul was known for unusual batting stance, which has been compared to a crab.

Chanderpaul amassed 20,000 runs in international cricket, and the International Cricket Council awarded him with the Sir Garfield Sobers Trophy (ICC Cricketer of the Year) in 2008. The Wisden Cricketers’ Almanack ranked him as one of the year’s top five cricketers that year. He captained WI in 14 Test matches and 16 One Day Internationals.

Tagenarine Chanderpaul, the newest batting prodigy for the West Indies, aspires to break out from his father’s mould. He is the son of prolific West Indies batter, Shivnarine Chanderpaul The left-hander recently played in his first Test match in Perth against Australia.

In March 2013, Tagenarine made his First Class debut for Guyana against Leewards, playing alongside his father, after honing his abilities at the Under-17 and Under-19 levels. Notably, he even took home the Guyana Cricket Board’s 2011 U-15 Cricketer of the Year Award.

In the Under-19 World Cup in the UAE in 2014, he further demonstrated his talent by scoring 293 runs in 6 innings, including a tonne and two fifty-plus scores. Shiv comparisons will follow Tagenarine throughout his career, but if the early going is any indication, Tagenarine may live up to the hype. He is also skilled with the ball and is an ambidextrous bowler.

As of now, there are no records about his wife, girlfriends, or romantic interest. He is assumed to be single.